Oil prices have swung between gains and losses over the past few months amid worries about demand and the economic impact of rising Covid-19 infection rates. But in recent weeks, Brent, the international benchmark, and West Texas Intermediate (WTI) futures, the U.S. benchmark, have rallied on hopes of a vaccine. In addition, the markets are anticipating the Organization of the Petroleum Exporting Countries (OPEC) and its allies, including Russia, would maintain lower output next year to support prices.

Overall, we continue to see a case for modestly higher crude prices on current fundamentals since global inventory levels continue to edge slightly lower. Over the longer term, the key issue remains the vaccine: The quicker and more effective a vaccine is, the faster the world economy will likely recover. Conversely, we believe that the slower a vaccine is to arrive and the less effective it is, the more the recovery is delayed and weakened.

Over the longer term, the key issue remains the vaccine: The quicker and more effective a vaccine is, the faster the world economy can recover.

On the demand side, there have been conflicting developments. Within the United States, gasoline demand seems to be flatlining but demand for diesel is strong, reflecting underlying traffic patterns. As U.S. manufacturing activity recovers and households continue to shop online, truck traffic is growing.

Other developments with demand are worth noting. One of the biggest dips in oil prices in October came when Europe announced its second wave of lockdowns. This will affect energy demand in Europe and raise the risk that lockdowns might extend more widely. High frequency data from Europe suggests road traffic there is falling. On the other hand, total European demand is about three quarters of the demand in the United States, and only a little higher than Chinese demand.

China’s economic recovery — reflecting its success in containing Covid-19 — is boosting spot prices for countries where China is an important player. China is the world’s biggest importer of crude. Demand in India is also rising.

On the supply side, the active hurricane season in the Atlantic has continued to disrupt production in the Gulf of Mexico. The disruptions have been short, refineries along the Gulf Coast seem to have escaped major damage, and U.S. crude production is recovering from the hurricanes. There have now been 30 hurricanes in 2020 — including the most recent, Hurricane Iota — breaking the previous record of 28 storms in 2005.

Looking across the globe, output from Libya is rising quite rapidly after the country’s two main warring factions agreed to a cease-fire in late October. Iraq’s economic difficulties seem to be mounting, and it may exceed its OPEC quota given the government’s desperate need for cash. OPEC+, which includes OPEC, Russia, and other producers, remains important for global oil markets. OPEC+ will meet on November 30 and December 1 and will look at options to extend its deal on output cuts. There are two options on the table; three- or six-month extensions starting from January 2021.

The late-October oil price drop, driven by the European lockdowns, prompted comments from Russia and Saudi Arabia about the OPEC+ deal. They both support an extension of the current deal, which expires in December. Russia is appointing a permanent representative to OPEC, which is being interpreted as a sign they want to cooperate more closely with Saudi Arabia.

OPEC has also indicated that deeper cuts will be discussed if there are signs of weaker demand and lower prices. There is an OPEC “floor” for cuts; but questions remain about the ability of OPEC+ to maintain discipline, or the willingness of Saudi Arabia to take on a disproportionate share of the burden.

Higher prices on the horizon

Overall, with OPEC+ looking reasonably reliable and evidence that demand is recovering in key markets such as China and India, we think prices can move a little higher from here. The key risks center, in our view, on the trajectory of Covid-19 and the worrying possibility that the U.S. economy will weaken further as the virus surges. 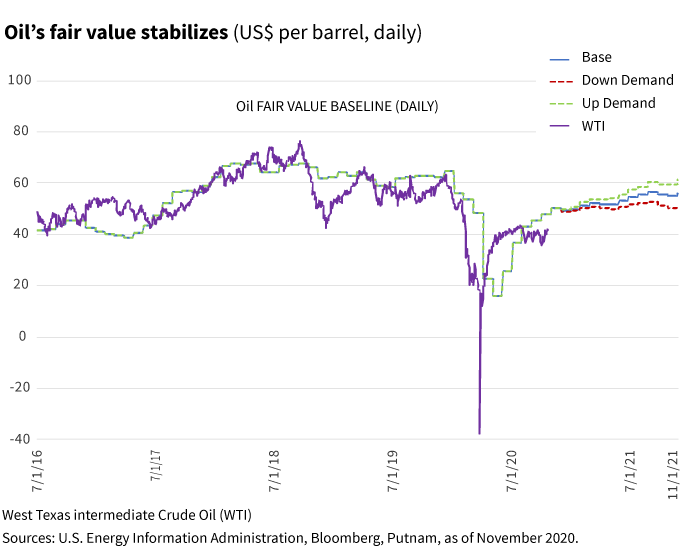 We believe the lockdowns are temporary, and vaccines are the long-term fix. Over the longer term, our target for WTI is $50 to $55 a barrel. While oil prices could temporarily exceed these levels in 2021, we don’t see a sustainable rally beyond that price.