Municipal bond supply has soared since the federal government earlier in 2020 pumped more than $1 trillion of fiscal stimulus into the economy. The Federal Reserve also contributed by launching multiple lending facilities to support markets, including a program for munis.

Municipal issuance has eased since the election on November 3. Supply will likely be light in the short term. However, reinvestment demand, after turning seasonally weaker, typically increases near year-end.

Municipal bonds, like other fixed income assets, tumbled when the pandemic hit and markets sold off in March. Outflows from the muni sector were high. In March, new issues totaled around $19 billion. Once the Fed launched its backstop facilities, munis began to reverse course. Issuance picked up to $46 billion between June and October. In fact, October marked the second highest supply month on record (second to December 2016) as issuers rushed to get in ahead of the election. Some $65.2 billion in muni bonds were issued (Source: The Bond Buyer).

The largest increase in issuance has been in taxable muni bonds, which rose more than 160% for the year to date, reaching an all-time high. This is because of a change introduced by the Tax Cuts and Jobs Act of 2017 (TCJA). Under the TCJA, when state and local governments refinance their debt more than 90 days before it matures (called advanced refunding), the new bonds are taxable. (Note, municipal bond issuers can still call existing debt and refinance it with tax-exempt bonds by refunding the issue within 90 days.) Many municipal issuers have used the taxable market this year to take advantage of lower interest rates. The byproduct is that the traditional tax-exempt supply is up by a much smaller amount — just 3% — than the taxable market year to date.

Demand for municipal debt has risen vigorously since the recovery began early in the second quarter of 2020. Tax-exempt mutual fund flows have been positive for the past five months, recouping the more than $45 billion crisis-induced outflows. The exception is high-yield munis, which have not come back completely. (ICI) 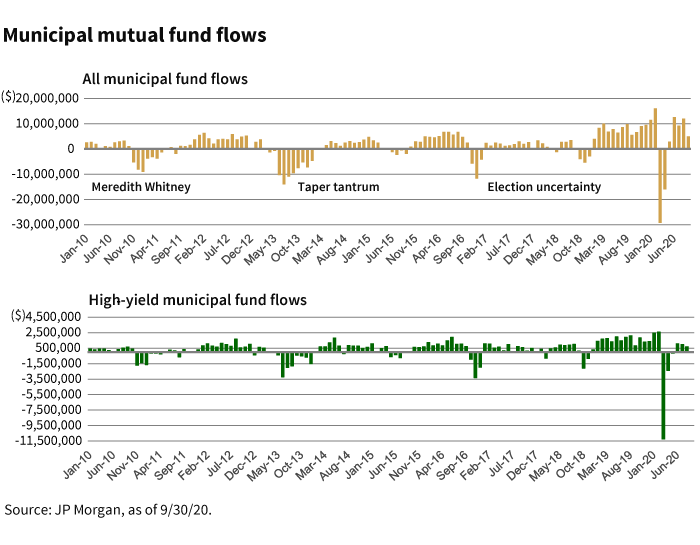 About 70% of muni bond holders are in the retail market.

Another type of buyer has returned to the market: banks. Bank demand this year is the strongest since 2017. Banks, for nearly a decade following the 2008 global financial crisis, had surpassed property/casualty companies as the largest institutional buyers of municipal bonds, but that changed when the TCJA reduced the corporate tax rate. The tax-exempt status of munis became less of an advantage, and banks became sellers. Today, banks are tactically adding municipal bonds.

There are still uncertainties post-election. Possible changes to individual and corporate tax rates and another likely stimulus package will have an impact on credit fundamentals and demand. With two Senate seats in Georgia up for grabs in a runoff election on January 5, 2021, it remains to be seen how the muni market will be impacted. While Congress is likely to pass a new stimulus package, if Republicans control the Senate they are likely to keep the size of the package much smaller than if Democrats control both houses of Congress and the presidency.

While defaults have increased modestly this year, we do not expect them to be widespread. The economic shock this year was unprecedented, but states entered the crisis in their best fiscal shape in over decade. We believe most states have ample reserves to address a decline in revenues. Even states that were less well-prepared still have quite a bit of financial flexibility and avenues to raise capital through the credit markets.

The municipal market continues to be an asset class offering quality, tax advantages and attractive opportunities, we believe. Munis have demonstrated resilience this year and even outperformed U.S. Treasurys and the broader taxable market in the third quarter. We think high yield munis, which have started to perform better of late, may still offer value, particularly in the utilities, higher education, charter schools, and tobacco sectors. At the same time, we remain selective, practicing our credit research discipline.