The U.S. labor market continues to lose steam. The pace of improvement in the jobs market has moderated in recent months as fewer Americans were able to find (actively seeking) work and dropped out of the labor force. This comes amid surging COVID-19 cases, new restrictions on businesses, and progress toward widespread vaccinations.

As the reopening impulse and the impact of fiscal stimulus fade, it is not surprising to see moderation in employment improvement. Although we have been adding significant numbers of people to the payrolls every month since May, the pace of gains has been slowing. Employers added 245,000 jobs in November, down from 610,000 jobs in October, the Labor Department reported.

The gains in November payrolls reflected consumer spending trends and were concentrated in sectors that benefited from the pandemic. Transportation and warehousing — which have been catering to online stores and gaining due to the shift toward goods consumption — added workers. Employers boosted jobs in healthcare despite the losses in nursing care facilities. But retail trade had net job losses. And leisure and hospitality employment changed little.

The unemployment rate in November edged down slightly to 6.7% from 6.9% a month earlier. But that figure does not fully capture the extent of the joblessness. We have discussed how misleading the unemployment rate and the jobless claims concepts are because they are heavily influenced by the type of unemployment programs that are implemented. In the United States, each state has its own unemployment plan; therefore, the duration of benefits, benefit amounts, and eligibility vary. A typical unemployment compensation lasts six months, outside of recessions. 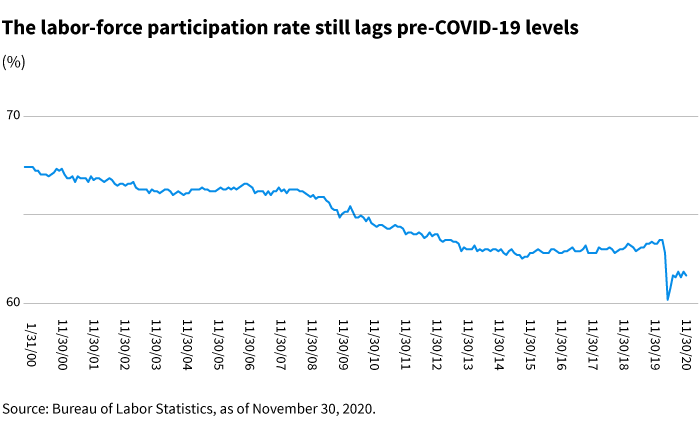 Unemployment benefits are designed to provide basic needs to individuals and keep the incentives to work intact. But, we believe the extra $600 a week hindered Americans’ willingness to look for a job. During the initial phase of the pandemic, the average unemployed worker earned more from jobless benefits than by working. The labor participation rate — the share of adults working or looking for work — dropped during the pandemic. That created supply shortages in certain sectors and added to cost pressures on businesses. The FPUC expired at the end of July and was partially and temporarily replaced by an executive order.

Other features of the new programs complicate the interpretation of data. Continued jobless claims, for example, represent Americans on regular state unemployment benefits. As these benefits expire, unemployed individuals shift to the federal PEUC, which is not a part of continued claims data. As individuals transition from one program to the other, improvements in continued claims have overrepresented labor market growth, seeming to suggest it is not taking individuals too long to find a job.

One final point on unemployment. The labor participation rate is affected by details in jobless benefits. As coverage and duration of benefits increase, the willingness to stay in the labor market rises. This is because the longer an individual is in the market, pretending to look for a job, the longer that person will receive benefits. This feature makes cross-country unemployment comparisons meaningless.

Some unemployment programs will expire at the end of 2020. We believe that these benefits clearly need an extension, but the politics of the lame-duck session is complicated. Democrats and Republicans are in the midst of negotiating a new pandemic relief package. Without another round of fiscal support, growth is likely to slow at the end of this year and in early 2021.

Other economic indicators also signal slower growth momentum in the fourth quarter of 2020 compared with the previous three months. Consumer spending (including at bars and restaurants) and retail sales have slowed. The pandemic winners — technology and online spending — have continued to do well. The recent rise in virus case counts will worsen the slowdown. There is a chance that first-quarter GDP will be negative, in our view.

We expect a stimulus package soon after a new Congress takes office in late January.

We expect a stimulus package soon after a new Congress takes office in late January. The likely drop in growth in fourth-quarter 2020 and first-quarter 2021 we believe will be followed by an economic reacceleration from mass immunization and the fiscal package. Growth in the second and third quarters of 2021 can approach double-digit numbers if vaccine developments stay on track, in our opinion. It is quite rare to have both a deteriorating near-term outlook and an improving medium-term outlook. We believe it would be ideal for fiscal policy to step in and bridge the gap.