Although the virus data fog remains dense, the U.S. economic data fog is lifting just a little. The flow of macroeconomic data continues to be bad, but we have to remember the lags involved. A few months ago, we argued that it was reasonable to think the economy would stabilize in June. We believe that point of stabilization probably came in May, and that the economy is now growing again, albeit very slowly. Against this backdrop, we remain cautious over an uptick in coronavirus cases as states reopen in some way.

We believe that point of stabilization probably came in May, and that the economy is now growing again, albeit very slowly. 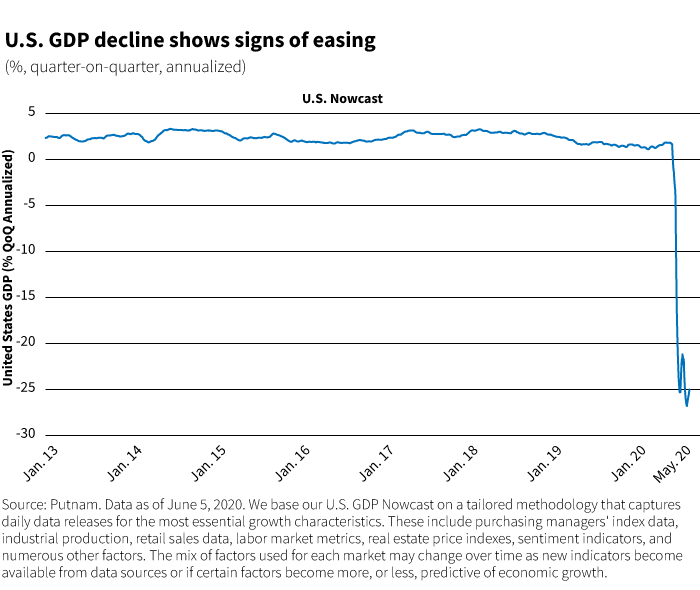 If we ignore parts of the economy that did well during the lockdowns, there are now three other areas to keep an eye on: those that are bouncing along the bottom, those that are growing very slowly, and those that seem to be recovering well. Mobility indicators show that people are driving more, and gasoline demand is growing, according to mobility data from Apple and Google as of June 5, 2020. New vehicle sales in the United States are slowly recovering from their collapse in April. Mortgage applications have also risen strongly as households that remain employed are attracted by low mortgage rates.

Recent household income and spending data shows that savings have also increased. However, note that the short-term spike in savings reflects incomes being propped up by transfers from the government and by limited spending opportunities because of the stay-at-home guidelines. Households have a decent amount of money to spend on things they can buy without feeling they are risking their health. Spending at restaurants is growing only slowly; social distancing is limiting capacity; and many consumers are nervous about disease transmission risks. As retail stores reopen, they are largely limiting the number of people who can enter, but they are at least doing business.

The May labor market data was clearly quite good. After two months of declines, employers added 2.5 million jobs last month and the jobless rate fell to 13.3% from April’s 14.7%, a post-World War II high. The Bureau of Labor Statistics pointed out there were some anomalies with the data, and perhaps the real story isn’t quite as good as the headlines suggest. Still, even allowing for these oddities, it was clearly an encouraging report, and it adds to the sense that the economy has passed the worst of the pandemic’s effects.

An alphabet soup of recovery shapes

As this early phase of recovery gets underway, we return to the debate over the shape of the recovery and how useful it is to think about a “V.” We remain confident that a “V” is simply not going to be an accurate way to describe this trajectory when analyzing where the economy will be at the end of 2020. The events of the past few months haven’t changed our views about the headwinds the economy faces. But that does not mean the economy doesn’t go through periods when everything will look and feel like a “V.” The Manufacturing Purchasing Managers’ Index (PMIs) for several countries, including the United States, China, and other developed and emerging economies, shows signs of a “V-shaped” recovery. But remember these are diffusion indices. Faring “better” doesn’t mean they are “good.” Levels matter.

We have to look beyond the unemployment rate, which we think is a deeply flawed measure at the best of times. Recent data illustrates the extent of the damage and the scale of the bounce in employment. Clearly, it is encouraging that some kind of recovery has started, but we have an awfully long way to go to repair the damage done by the lockdowns. So, again, levels matter.

The Federal Reserve left interest rates unchanged near zero on June 10 as the central bank projected a slow economic recovery from the pandemic-induced recession. Fed Chair Jerome Powell also projected high unemployment for several years. Growing fears of a surge in coronavirus infections had sent the stock market tumbling on June 11, the biggest drop since March.

As movement restrictions ease and consumer spending at restaurants picks up, employment rises. But remember that restaurants are operating below capacity because most jurisdictions insist on lower capacity to preserve some social distancing. At the same time, consumers remain nervous about the risks of contracting COVID-19. The average business isn’t viable at 50% capacity. So, we have to keep two things in mind. As the restaurant industry recovers from a drop of, say, 90% to a drop of 50%, it will display rapid growth and all the characteristics of the early part of a “V.” There is enough household income and household confidence to support this first phase. On the other hand, in our opinion, continuing to grow at this kind of pace and to return to pre-COVID-19 levels of economic activity simply isn’t plausible given the damage that has been done and the structural headwinds.