The global economy is now growing at a reasonable pace after an initial burst of activity and somewhat of a slowdown in the early part of the summer. Still, performance varies across main economic sectors, and there are considerable headwinds to growth. We believe the outlook for 2021 — at least in the second half of the year — is starting to look a bit brighter. The development of a vaccine for COVID-19 would help realize this possibility. 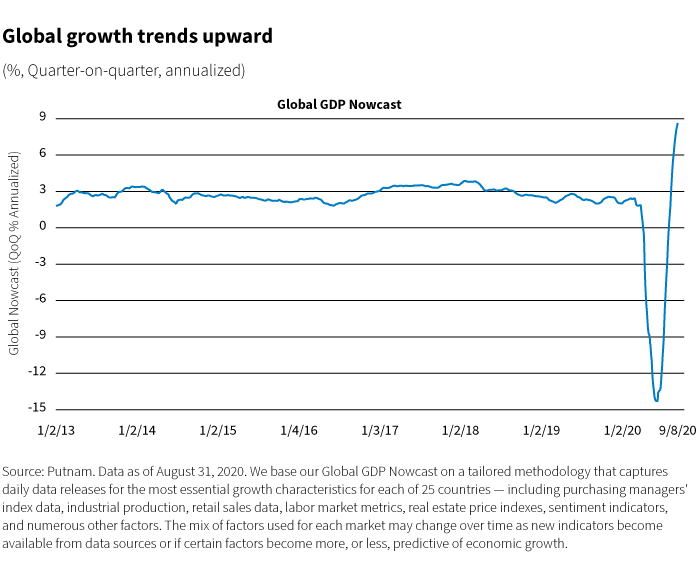 Recent data on Covid-19 has been mildly encouraging. Although case numbers remain persistently high across the United States, reports of new infections have dropped since late July. But hotspots at some universities mean we can’t get carried away with optimism. News on the development of a vaccine remains encouraging but it’s not going to change COVID-19’s dynamics in the near term. In our view, the virus’s resurgence in many parts of Europe has caused the pace of recovery to slow. That said, hospitalization and death rates remain relatively low among European countries. Testing is now widespread, higher risk people are voluntarily restricting their mobility, and there are improvements in treatments.

The global economy can continue to recover, and the risk of renewed widespread lockdowns is low.

In our opinion, this means the global economy can continue to recover, and the risk of renewed widespread lockdowns is low. But the virus remains a threat and acts as a headwind to growth. Globally, the manufacturing recovery has been good, whereas the service sectors’ recovery has been more sluggish. Demand for goods is strong, and we expect there will be an inventory boost to manufacturing in coming months. On the other hand, the service sector remains vulnerable to COVID-19 flare-ups and the risk this poses for consumer confidence. Flagging fiscal support in many countries will also play a role.

The general global story of a better recovery in manufacturing than in services is also playing out in emerging-market economies. The recovery in China is boosting its trading partners in Asia and Latin America. Countries with longer and more serious lockdowns, such as India and the Philippines, had deeper growth shocks. While many of the PMIs look strong, these are diffusion indices and thus overstate the degree of improvement. Broader OECD indicators suggest recessionary conditions continue to prevail. The truth lies in between; some recovery is now underway, but it is less strong than the manufacturing data alone would suggest, in our view.

While positive data surprises continue in many regions, we remain skeptical about a “V-shaped” recovery. This is partly because strength in some parts of the economy, such as housing and consumer spending on durables, is related to reactions to COVID-19, and not because the economy is on a new sustainable growth path. There are grounds for optimism that 2021 might see a faster recovery. The key issue is progress in the development of vaccines. For now, the probability of getting into a “vaccine” world, with greater levels of population immunity and mobility, is clearly greater than zero and seems to be edging higher.

The U.S. economy continues to recover but at a slower pace. While some macro data looks strong and key sectors are doing well, there are headwinds. The virus remains a threat to consumer confidence and spending, and new hotspots keep emerging. The August payroll gains were healthy but marked the second straight monthly slowdown in hiring. The private sector added 1 million jobs, down substantially from 1.5 million in July. We believe a recovery from here will be a lot harder, at least until there’s a vaccine.

The constraints on the upturn remain unchanged. As long as the virus is perceived to be a threat by the public and policymakers, social interactions and economic activity will be affected. The other constraint is policy. In September, the Trump administration announced an order to suspend the possibility of eviction for millions of renters who have suffered financially because of the COVID-19 pandemic. While this will benefit renters, it imposes the associated costs on people in the private sector. With no new money, this is just a game of pass the parcel.

The fiscal policy debate continues in Congress. There are some sectors, such as commercial real estate and airlines, that are trying to get some relief. States and municipalities are also facing revenue shortfalls and looking to Washington for assistance. Small businesses that were kept afloat by the Paycheck Protection Program are now running out of options. Then there is the unemployment insurance problem. We believe the economy and risky asset markets will struggle in the absence of a new round of fiscal stimulus. The election clearly complicates matters.

We are emerging from recession, but the speed of recovery is slowing as the easy gains have already been recorded.

Our economic models signal “no recession.” The Conference Board’s leading indicator tells an interesting story. The drop in the traditional macro variables that make up this indicator was far faster than other recessions, and the models reacted with a lag. Now the leading indicators are recovering, but the second derivative is declining. We believe we are emerging from recession, but the speed of recovery is slowing as the easy gains have already been recorded.