In our view, the structural challenges in Europe and Japan mask enormous recovery potential, which is generally underappreciated by the market.

Earnings are among the factors to watch
To return to their pre-2008 peak, European company earnings would have to nearly double from current levels. While that certainly will not happen overnight, the earnings gap does suggest meaningful pent-up potential. 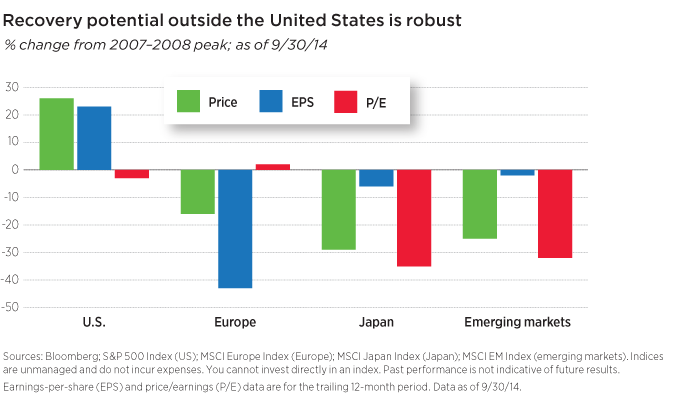 A variety of other factors will continue to exert broad influence on non-U.S. stocks in the months ahead. For Europe, these include the potential effects of Europe’s new policy measures, the beneficial impact of a weakening euro, and the continuing evolution of the situation between Russia and the West. China’s growth, too, will continue to be an important factor. If the policy, currency, and geopolitical factors improve as we hope but China disappoints, it may deliver a mixed picture for non-U.S. and even global stock performance.

The exuberance of emerging markets may cool off
Emerging markets performed unexpectedly well for much of the year, though they pulled back in a number of cases since September. Early-year weakness of the U.S. economy and the dollar opened a window through which emerging markets were propelled higher. In addition, a number of political events, such as the election of reform-minded leaders in India and Indonesia, helped these markets rally.

However, the U.S. dollar’s more recent appreciation relative to other currencies may portend weakness in future months. At greatest risk, we think, are countries like South Africa, Turkey, and to some extent Brazil, as these nations run twin deficits — a fiscal deficit, where expenses exceed revenues, and a current account deficit, where imports are greater than exports.

Economic reforms may help Mexico
We believe other countries, such as Mexico and possibly India, could continue to make gains, particularly those companies that stand to benefit most from economic reforms in these countries. The problem as we see it, though, is that changes in political leadership in countries like India and Indonesia — while they may herald positive reforms — seldom have the power to effect meaningful and positively received economic changes very quickly.

Mexico is a contrasting example, as the country’s most recent leadership changes are a couple of years old, and economic reforms have been implemented and taken root. For this reason, we favor a market like Mexico, with its record of reform changes, over a market like India, which has largely untested new political leadership.