At the core of U.S. economic growth is a factor that is most often overlooked.

The main source of growth is innovation and efficiency, particularly as expressed in a constellation of technology industries and in manufacturing.

In dissecting economic growth, we have investigated two major sources of growth: labor productivity and the growth of hours worked. Behind labor productivity, there are several contributing factors, but many analysts do not fully appreciate the significance of a certain metric — total factor productivity (TFP), which measures improvements in the efficient use of labor and capital.

More than any other factor, we believe TFP has the capacity to make or break growth in the United States. We see TFP becoming a potentially stable positive contributor to labor productivity, and therefore growth, over the long term. 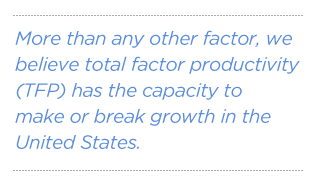 What does TFP look like?
TFP measures the effects from changes in frequently unmeasured inputs, such as innovation, research and development, and other intangible investments. Replacing an employee’s computer with a more powerful machine, for example, adds to TFP. In addition, TFP quantifies the effects from organizational and institutional change, as when a firm streamlines its patterns of production and thereby realizes productivity enhancements.

We find the true engine inside TFP to be ICT, which has proven to be, since 1996, the strongest source of innovation and efficiency in the U.S. economy. ICT has generated the largest percentage of labor productivity relative to all other industries, but volatility is also high.

Our research on innovative industry sectors suggests that 56% of all labor productivity will be generated by two industries: ICT and manufacturing. And within ICT, electrical and optical equipment will be the dominating forces of productivity.

We believe a return to longer-term historical growth is not only possible, but is likely to occur. Positive trends in TFP support that outlook.