Today, the United States’ economy is growing while Europe’s is essentially flat. And the difference between these two trajectories may come down to policy paths taken or not taken.

While governments on both sides of the Atlantic have reduced their deficits over the past five-plus years, they have taken substantially different approaches to achieving this important goal. In Europe, policymakers have leaned quite a bit more than their U.S. counterparts on reducing spending. This has put downward pressure on Europe’s GDP growth. In the United States, there has been more focus on so-called “quantitative easing” programs, and we have continued to see rebounding GDP. 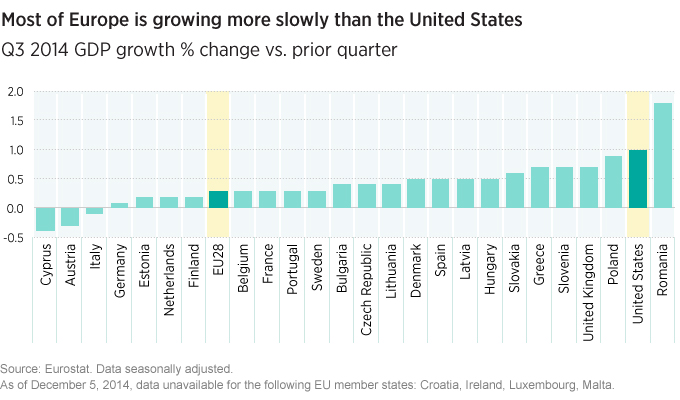 Europe playing catch-up to the United States
In terms of monetary policy, the United States thus appears to be a couple of years ahead of Europe. As early as 2008, U.S. policymakers initiated a fairly aggressive monetary stimulus program and quantitative easing, involving trillions of dollars of government bond purchases and other direct market interventions.

Now, shortly after the United States finished winding up its bond-buying activities, Europe has made its first major foray into its version of quantitative easing. While this so far has included different types of asset purchases, no commitment to buy European sovereign debt has as yet been made. Hopefully for Europe, growth — and inflation levels — will accelerate over the next 6 to 12 months.

Differences within Europe
In Europe, it should be noted, not all countries have approached reform in the same way, and there are important intra-regional differences that we have observed and continue to monitor. In one regard, the degree of flexibility in labor laws varies by country, which has an impact on unit-labor costs across the eurozone.

Spain, for example, moved aggressively with respect to its unit-labor costs in order to become more competitive on the global stage. Consequently, Spanish exporters have improved their conditions more than have exporters in some of the other peripheral European countries.

Italy and France, by contrast, have struggled because of the relative inflexibility of their labor laws and relative fixed unit-labor costs.