We believe there is a link between the trajectory of the coronavirus (COVID-19) and its economic impact. The virus won’t peter out on its own, and its transmission will be reduced only through voluntary or involuntary restrictions. These restrictions and behavioral responses harm economic activity. To the extent other countries try to limit the disease’s transmission, or their populations adjust behavior voluntarily, they will see economic effects.

That’s what’s happening in Italy right now. The government has extended its lockdown to the entire country. This means a sharp economic downturn is inevitable. Italy is a big enough economy that a recession will create a eurozone problem. The eurozone will contract in the first half of 2020 and maybe recover enough in the second half to get annual growth around zero. In Spain, given the latest virus data, the risk is that even this forecast is too optimistic. Iran will be an interesting test case of what happens when a government takes fewer preventive measures. But the data from Iran is so poor, we won’t learn as much as we’d like.

In other words, containment of the disease seems to require some economic effects. Containment comes at a cost. In the United States, we are at the very beginning of this process.

The OECD revised its global economic forecasts. The agency said its best case for the COVID-19 impact was a reduction in 2020 global growth to 2.5% from 2.9%. There are plausible scenarios that are much worse. 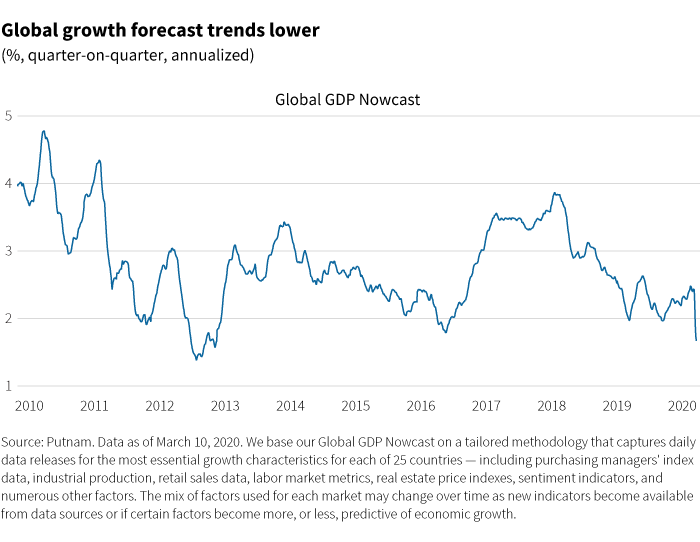 The immediate impact is on the supply side of the economy, as we have seen in China. Production of widgets drop, and this means users of widgets, at home or abroad, can’t get widgets for their production processes. Then there are the demand side effects. People in quarantine can’t engage in any social consumption, and the government or some other entity might prohibit or actively discourage large-scale gatherings. As a result, social consumption falls. These demand side effects are, in our judgment, more important than the supply side effects, and are less likely to be made up in the future and therefore more likely to represent permanent losses to the economy.

Then there are further effects through the financial system. Take the owners of cinemas in Italy — their cash flow is being hit pretty hard, and if they are highly leveraged, how long will it be before their bankers, or bondholders, start to get nervous? In the week of February 24–March 1, when it became clear Italy had a COVID-19 problem, cinema admissions for the 10 most popular movies were more than 70% lower than the previous week. Without cash flow, the owners of these enterprises, and countless other family-owned restaurants and entertainment centers in Italy, China, and South Korea, are facing acute distress. Without cash flow, they are laying off workers and might have to sell assets at what would be distressed prices.

If there are firms that were teetering on the brink of insolvency, central banks would prefer to deal with bankruptcies at a later date when the economy is recovering rather than deal with layoffs and distressed asset sales in the midst of the crisis. There are, of course, limits to moral suasion, but in the short run it’s a policy weapon that can be deployed.

The idea of tapering the Fed’s repo operations is absurd in the current context.

Secondly, all central banks, and the Fed in particular, will need to ensure there is adequate liquidity in the system. It’s particularly important for the Fed given the role of the dollar in the global financial plumbing. The idea of tapering the Fed’s repo operations is absurd in the current context. For some central banks the main policy strategy now is hope that governments will relax fiscal guidelines; hope that the COVID-19-induced economic downturn really is temporary; and hope there will soon be an autonomous improvement in the virus data, in economic confidence, or in both.

The impact of oil

The oil price collapse contributes to our deteriorating outlook for three reasons. The Saudis and the Russians have decided to have a fight, and the Saudis’ promised April supply appears bigger than their production capacity. The Saudi moves are at least in part designed to increase the incentives for a deal to reduce supplies. An agreement is possible, but its best to work with the assumption of “lower for longer.” This Saudi–Russian fight is taking place against the backdrop of rising U.S. production and the challenge the United States poses for OPEC. In a sense, both Russia and the Saudis are really trying to influence the United States as much as each other.

The 2015/2016 oil price drop pushed up energy defaults and created a mini-credit cycle in the U.S. corporate bond market. There will be more stress this time around. Energy production has been a buoyant part of the U.S. economy, and this is at risk now.

Given all this, the economic outlook has deteriorated. The global economy at the end of 2020 will be smaller by a decent amount than we forecast at the end of 2019. We’ve lost too much economic activity, and a lot of the loss may be permanent. There is also a real risk of an even worse outlook. Italy will face recession. The sharp re-rating of assets are pricing in a weaker global growth outlook. Policymakers have signaled they are willing to step in. But in the absence of a clearer picture of the spread of the virus, it’s hard to make the case for anything other than a tentative and volatile recovery in risky assets. Even if prices currently are consistent with the downgraded outlook, episodes of volatility still seem likely. U.S. rates will have to fall further, and the quickest way to get rates down is weakness in risky asset prices.

We are still reluctant to forecast a recession in the United States, but weaker growth is inevitable.

We are still reluctant to forecast a recession in the United States, but weaker growth is inevitable. To a very small extent, this is because of COVID-19 and the rising impact this is having as U.S. households take notice and more corporations react. To a greater extent, it’s because of the drop in oil and the threat this poses to a previously buoyant part of the economy. And it’s also because the behavior of risky assets raises the risk of further stress being placed on the private economy. Although recession risks have risen in the United States, it is not our central scenario.