Since the taper tantrum in 2013, when the market reacted negatively to comments by Fed officials about planning to taper off asset purchases, the interest-rate and inflation environment has been generally benign. Strategies aligned with the interest-rate risk embedded in common benchmarks such as the Bloomberg Barclays Global Aggregate Bond Index and the Bloomberg Barclays U.S. Aggregate Bond Index have performed well, outperforming most unconstrained strategies. 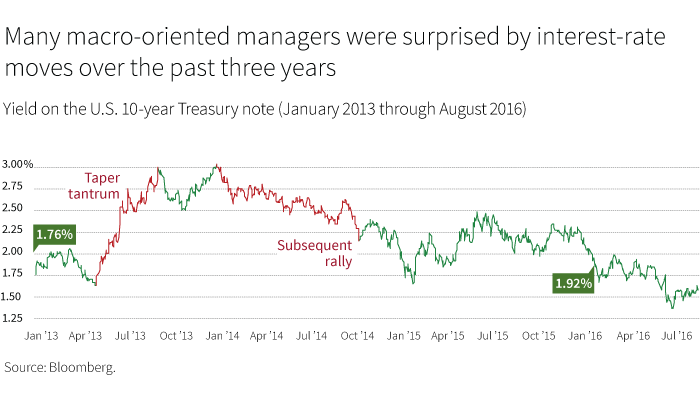 However, while rates have ratcheted downward, upward movements in the 10-year Treasury yield suggest that the market has remained on watch for a rapid shift in the interest-rate outlook. Investors, aware that central bank policies have contributed to moving rates to their current levels, recognize that both policies and rates could move in a new direction with little warning.

Flexibility and diversification help prepare for the unexpected

At a time of global policy divergence, we believe it makes sense to be prepared for rapid shifts in market expectations. The Fed has reacted to emerging data over the past year in ways that kept a lid on rates, but this data-dependency means that its intentions could change when data trends change. For example, in the immediate aftermath of the Brexit referendum, it appeared another rate hike in 2016 was off the table. Yet, by early August, a Wall Street Journal survey of economists pointed to December as the most likely time for the next rate hike.

Meanwhile, in Europe and Japan, where central banks are experimenting with negative-interest-rate policies, it is questionable whether they are obtaining the results that they had hoped for. GDP growth remains extremely sluggish, and, in the case of Japan, a stronger yen hurts exporting companies. While neither the European Central Bank nor the Bank of Japan is yet commenting on changing these policies, headwinds exist. Questions surrounding the supply of bonds that the ECB and the BoJ can buy, for example, may pose an obstacle to these policies.

Uncertainty over policy may make it attractive to have flexibility in an interest-rate strategy, combined with other types of investment flexibility that come with an unconstrained approach. Investing beyond the constraints of an index allows an unconstrained approach to pursue opportunities in corporate and mortgage credit sectors and in emerging markets. In all of these areas, fundamental credit research can be valuable for identifying sources of potential return that can supplement strategies that depend on falling rates.