Oil markets have had quite a month amid the coronavirus pandemic, the price war between Russia and Saudi Arabia, and the historic OPEC+ deal to slash output. The May futures contract for West Texas Intermediate (WTI) crude, the U.S. benchmark, turned negative for the first time on April 20 because of limited storage capacity at Cushing in Oklahoma. Some buyers scrambled to avoid taking physical delivery of the oil due to limits in storage facilities and paid to get rid of these contracts. As a result, WTI for May delivery fell to around -$40.3 a barrel, the day before the contracts expired. The June contracts have so far stayed positive.

The prices of Brent, the international benchmark, have yet to dip below zero because these contracts don’t require buyers to take physical delivery of the oil. Brent producers have access to floating storage-tankers. These price swings are alarming because they signal that the global capacity for storage is nearing its upper limits. Producers worldwide have underestimated the impact of the coronavirus pandemic on oil demand.

Demand for oil has collapsed in recent weeks as the pandemic devastates the global economy and curbs much of the need for fuel from companies and consumers. The Apple COVID-19 mobility index shows a 40%–80% drop in traffic density in various countries around the world. Some of the world’s biggest producers, including Saudi Arabia and Russia, agreed in April to cut production by about 10 million barrels a day beginning in May in an effort to stem oil-price losses. On top of this agreement, oil producers in the Group of 20 promised to contribute their own output reductions. Saudi Arabia started reducing output ahead of the May 1 start date for OPEC+ supply cuts. Saudi Arabia, the United Arab Emirates, and Kuwait have also said they could cut production further if other countries comply with the deal. The International Energy Agency (IEA) has also called for more strategic buying of oil reserves.

The OPEC+ deal did not fully address the slump in global demand amid the lockdowns.

Even so, the OPEC+ deal did not fully address the slump in global demand amid the lockdowns. We believe the cuts so far are insufficient to balance supply and demand dynamics. Stability in oil prices will depend on how fast demand recovers and when the shelter in place policies are lifted. Meanwhile, the surplus of oil on a global level and historically low prices will test storage capacity and force a widespread suspension of production, or a shut-in. Our baseline for demand recovery implies that we might hit the global storage capacity around late May. To prevent that, we expect that we will need a broader alliance of oil producers undertaking deeper cuts as soon as possible. We have yet to see any signs of such an alliance.

At the beginning of the year, WTI and Brent were trading above $60 a barrel. Oil prices have already declined by more than 65% so far this year. The price anomalies over the past few weeks are signs of stress in the physical oil markets due to storage capacity problems. We could see the repeat of these episodes over the next few months. Over the longer term, we believe the fair value of oil in a competitive market will be $35–$40 a barrel and that prices will converge to fair value levels. However, the path to this fair value is highly dependent on the timing and size of demand recovery. 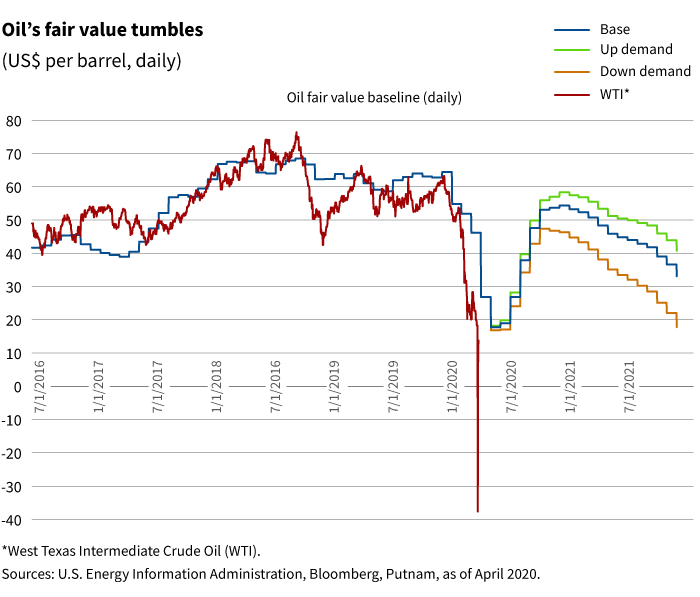 There are three phases (our baseline) for the possible movement in oil prices. First, prices would remain at stressed levels (under $20 a barrel) for the next two months until demand recovers and OPEC+ cuts make an impact. Oil producers may involuntarily impose shut-ins during this period. Some of these shut-ins are irreversible. In the second phase, prices will recover and overshoot to mid-$50s a barrel by the end of 2020 and the beginning of 2021. That would be above our long-term fair value of $35–$40 a barrel. The drop in demand could bottom in June and sharply recover in July. In addition, OPEC+ output cuts could take effect, and some involuntary shut-ins would be lifted, albeit slowly. During this phase, prices could be supported by global inventory drawdowns.

In the third phase, prices will decline and then hover near the long-term fair value. OPEC+ members could start to waiver on their pledges to lower output, and the current agreement to lower production could collapse in the fourth quarter of 2020. This is largely because we believe OPEC+ countries will be desperate for cash and will not want to lose market share to non-OPEC producers. As the OPEC+ pact collapses, market share wars will start again and the oil market regime will switch to competitive markets. In this phase, oil prices will converge to the cost of the U.S. shale industry — marginal producers who will also be the new swing producers. Activating U.S. shale investment requires a shorter lead time than other types of oil fields because fixed costs are low and the variable costs are high. In our opinion, such a cost structure makes the U.S. shale industry the perfect candidate to be a swing producer — adding capacity when needed to move the market back to balance — because they could adjust their supply quickly depending on price levels.

Our baseline forecasts are dependent on the timing and the magnitude of the recovery in demand. If demand remains weak, oil prices will decline further and involuntary cuts will rise. An early recovery in demand for oil, however, would mean smaller forced cuts, smaller price declines in the near term and, ultimately, a smaller chance of prices overshooting in the future.