In a trend that emerged in April, investors returned to asset classes they abandoned early in the pandemic.

In July, many fixed-income sectors continued to rebound, including municipal bonds. After losing ground in March and April, the BBG Barclays Municipal Bond Index has risen to a positive 3.80% return for the year through July 31, 2020. Yields on municipal bonds have fallen to levels not seen in decades.

Among mutual fund investors, demand rebounded after April. Net new cash flow into municipal bond funds turned positive in May and has persisted throughout the summer. For example, net flows totaled nearly $3 billion each week for the past five weeks alone. (ICI, August 19, 2020).

Investors seeking tax-exempt income typically include municipal bond funds in their fixed-income allocation. Unlike Treasuries or corporate bonds, the interest earned on municipal bonds is free from federal and, in some cases, state and local income taxes. The tax-free status can be an advantage for investors who may be subject to high personal income taxes.

Demand for munis has been solid since the Tax Cuts and Jobs Act of 2017 set a cap on state and local tax deductions (SALT). With that change in the law, many taxpayers have not been able to itemize deductions, making them consider other strategies for reducing the bite of income taxes. Because municipal bonds are exempt from federal income taxes, retail demand for them has increased. In particular, individual investors in high-tax states like New York and California have used munis to try to mitigate their tax liability.

How income opportunities have changed in 2020

Historically, municipal bonds have offered attractive opportunities for after-tax income relative to taxable sectors such as government or corporate bonds. This might not have been clear to investors who focused on yields, because muni yields were often relatively low. Tax exemption provided the difference.

The COVID-19 pandemic caused a large shift in the fixed-income market. Initially, corporate and municipal bonds sold off while Treasuries rallied, which widened yield spreads.

Amid the turmoil, the Federal Reserve took unprecedented action to support funding markets with a series of facilities and programs. In April, the Fed authorized the Municipal Liquidity Facility (MLF) to provide aid to state and local governments struggling with the economic impact from the pandemic lockdowns. Recognizing the potential for significant future revenue declines, the Fed quickly expanded and extended the duration of the program. In addition, Congress stepped in with fiscal support, passing a pandemic relief package with $484 billion to aid small businesses and hospitals.

In this context, the Fed also quickly slashed short-term interest rates. As a result, the interest offered by certificates of deposit (CDs) plunged.

By June 30, the shift in the fixed-income landscape showed much lower income opportunities for CDs and Treasuries. While municipal bond yields are also lower this year, their after-tax income advantage remains compelling. 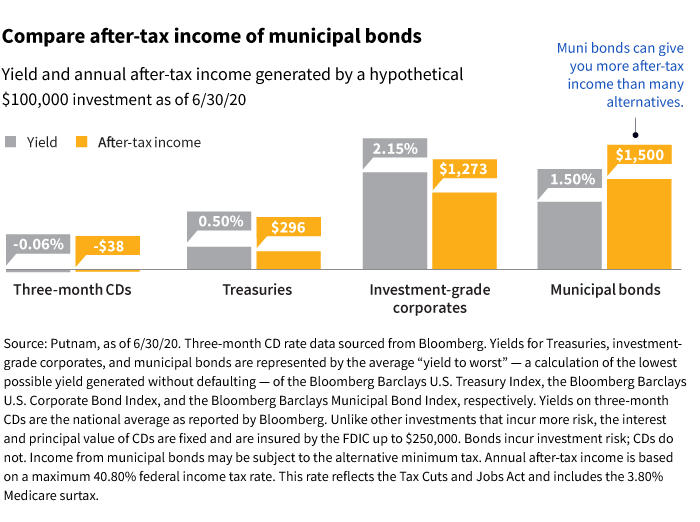 Business closures and stay-at-home restrictions that went into effect in many states during March and lasting into May and June, in some cases, reduced state revenues from sales, business, and income taxes, as well as other fees. States and municipalities received short-term help from Fed programs, but the longer term budget effects are still unfolding. Research from the Tax Foundation estimates a $121 billion decline in expected state tax receipts for the current and coming fiscal years. Fortunately, state and local finances were in relatively solid condition entering 2020 after a decade-long economic expansion. Historically, the default rate of the muni market has been low, averaging less than 1%, during economic recessions and expansions.

The economic recovery is tied to the pandemic’s trajectory. Certainly the coronavirus is better understood today than in March. Researchers are working across the globe to identify improved therapeutics and vaccines. These advances will likely influence policy and fiscal decision making going forward. State and local governments will likely turn to reserves to offset revenue declines due to the weakened economy. At the same time, local governments have flexibility to take additional actions to shore up budget shortfalls such as cutting expenses, increase borrowing, accessing the Fed’s MLF, or raising revenue through taxation.

Evaluate yields on a tax-equivalent basis