Prime Minister Shinzo Abe — Japan’s longest-serving post-war leader — announced in late August that he would resign because of health concerns. Yoshihide Suga, who was elected as the new prime minister in mid-September, faces economic challenges amid the COVID-19 crisis. Financial markets are keenly eyeing the successor and whether Japan will slowly drift away from reforms. The key question is whether the departure of Abe means the end of Abenomics?

The three “arrows” in Abenomics

Abe came to power with an ambitious agenda of reform. He hoped to rewrite Japan’s pacifist constitution to allow overseas military deployment, increase its global presence, and shift the economy out of its deflationary mood. His “Abenomics” strategy had three “arrows”: fiscal expansion, aggressive monetary easing, and deregulation.

The COVID-19 pandemic had a dramatic impact on the economy in the final months of Abe’s tenure.

The deregulation agenda certainly had some successes. Female labor force participation, a focus of Abe’s team, reached a record level in 2019, tourism rose, and corporate governance has improved. But despite a clear parliamentary majority during his eight years in office, large parts of the agenda were either not enacted or produced no tangible results. The COVID-19 pandemic had a dramatic impact on the economy in the final months of Abe’s tenure.

“Japanification” and the global reach

From a global perspective, Japan’s persistently low inflation and movements in the yen matter. Abe picked Haruhiko Kuroda as governor of the Bank of Japan (BoJ) in 2013. Kuroda announced an aggressive monetary easing program. While deflation between 2008 to 2012 ended, the levels of inflation that replaced it have been extremely low and well below the 2% target set by the BoJ. This is relevant for the rest of the world because of “Japanification” — the fear that Japan is the future for advanced economies with aging demographics, low growth potential, and high public debt.

Most of the modern tools of central banking, such as quantitative easing, negative interest rates, and yield curve caps, were first adopted in Japan. The BoJ has led the way in monetary policy, and the European Central Bank and the Federal Reserve are followers. In Japan, however, monetary policy only nudged average inflation higher by less than one percentage point between 2010 and 2012 — and 2017 and 2019. Very low inflation expectations remain deeply entrenched even though the BoJ is a big buyer of government debt. The structural impediments to higher inflation seem to be substantial.

BoJ’s focus on the yen

During the Abe era, the yen has moved rather differently. The currency appreciated to around 75 yen per dollar by late 2011 from below 125 in mid-2007. Under Abe and Kuroda, it reversed course and depreciated to 125 in mid-2015. It traded briefly below 100 in mid-2016 and appreciated for a few weeks during the height of the COVID-19 panic in late February and early March 2020. The yen has been trading between 104 and 108 over the past few months. We view the shift in the yen under Abenomics as a key theme. 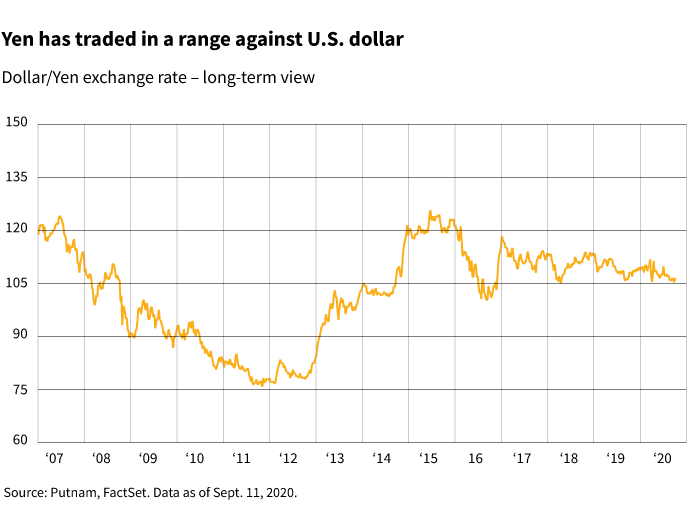 This shift was closely linked with the change in Japan’s current account over the same period. The yen’s appreciation from 2007 to 2011 caused the current account surplus to shrink; its reversal from 2012 pushed the surplus back up. It shrank again under the impact of COVID-19. The current account surplus becomes capital outflows; outflows that were encouraged under Abenomics as large public financial institutions were given a range of incentives to export capital. Japanese capital has played a role in pushing global interest rates lower.

Eyeing the successor Suga and his plans

Will Abenomics end with the end of Abe’s premiership? The BoJ’s Kuroda will remain in office until 2023, so there is no reason to expect a major change at the central bank. Suga, chief cabinet secretary since Abe took office again in 2012, was elected Japan’s next prime minister following a vote in the country’s Parliament on September 16. He will now head the ruling Liberal Democratic Party (LDP). Suga, who seems to lack any major ideological commitments, was favored by key LDP factions because of his competence as the economy deals with the consequences of the COVID-19 pandemic.

We do not think Suga will announce any formal retreat from Abenomics. So far, he has stressed continuity with Abe and Abe’s policies. On the other hand, his lack of charisma and lack of popular support means he is not likely to push the domestic reform agenda forward, and he will spend more time managing the competing factions within the LDP. The risk, therefore, is not that there will be a major policy change; it is that there will be a slow drift away from reform and Japan will settle back into its former behavior. Watch the trend of the yen for the key indicator of this risk materializing.