Studying market history may help provide a useful framework for investors as we navigate the recession of 2020. We looked back at the 5 recessions since 1980 as a guide.

In our research, we used the National Bureau of Economic Research (NBER) based Recession Indicators. This time series, which has data going back to the end of 1854, is an interpretation of the US Business Cycle Expansions and Contractions and is often used to officially denote when the U.S. economy is in a recessionary or expansionary period.

Using the common history between the NBER data, and launch of the Russell indices in January 1979, we can officially identify 5 recessionary periods, which troughed at the following dates (not including the current recession):

With those dates identified, we next looked at the performance of both the Russell 1000 Value and Russell 1000 Growth indices. For simplicity, performance of value and growth was assessed on a relative basis, noted as value relative to growth (Value/Growth). In charting the 5 individual cycles, the Value/Growth level was rebased to 100 at the official end of each recessionary period. The cumulative growth of Value/Growth was plotted starting 12 months prior to the official end of the recession and through the next 60 months (5 years) post. This setup allows us to observe the historical relative performance of Value/Growth in the months leading up to and during the recession, but also, the subsequent recovery. Each of the individual cycles are displayed in Exhibit 1. 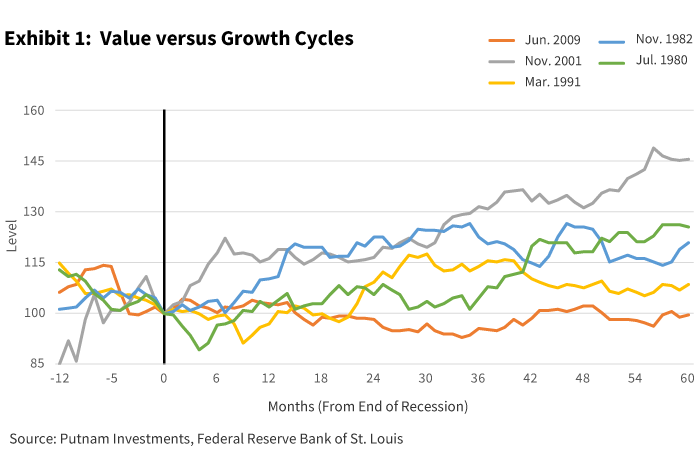 We then built the Archetypal Path, which is simply the average of all the individual paths. We observe that value underperformed growth in the months leading up to and during a recession, as evidenced by the downward trending line. However, when the economy officially troughed, value outperformed growth by 20% on a cumulative basis or 3.73% on an annualized basis. Exhibit 2 shows the Archetypal Path: 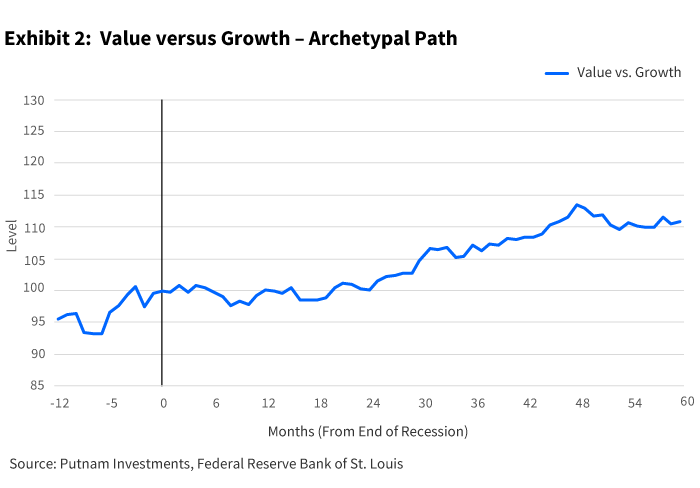 The Russell 1000 Growth Index is an unmanaged index of those companies in the large-cap Russell 1000 Index chosen for their growth orientation.

The Russell 1000 Value Index is an unmanaged index of those companies in the large-cap Russell 1000 Index chosen for their value orientation.

The securities holdings of the composite may differ materially from those of the index used for comparative purposes. Indexes are unmanaged and do not incur expenses. You cannot invest directly in an index.