In August 2020, the Federal Reserve announced a shift in its approach to monetary policy. The Fed will drop its longstanding practice of preemptively lifting rates to head off higher inflation and has signaled that it wants inflation to rise modestly above the 2% target. Fed Chair Jerome Powell said the bank’s new strategy could be viewed as a “a flexible form of average inflation targeting.” We analyze the implications of this move for Fed policy over the long term.

There are two interesting features in the new Fed framework. The first is that the non-accelerating inflation rate of unemployment (NAIRU) is being downplayed. Instead of worrying about the NAIRU or the slope of the Phillips curve, the Fed will look at the employment shortfall from its previous maximum level. The Phillips curve is an economic model that refers to the inverse relationship between unemployment and inflation. Amid growing concern about inequality, the Fed is recognizing, and incorporating into its thinking, that gains to lower income and ethnic minority workers accrue more rapidly late in the cycle.

The second feature is the adoption of average inflation targeting. The idea is simple: If inflation is below target one year, let it run above target the next year. This would seem to be consistent with a steeper yield curve. This policy will push the first rate hike further into the future, and, if the Fed were to be successful, average inflation over the next 10 years would be higher. 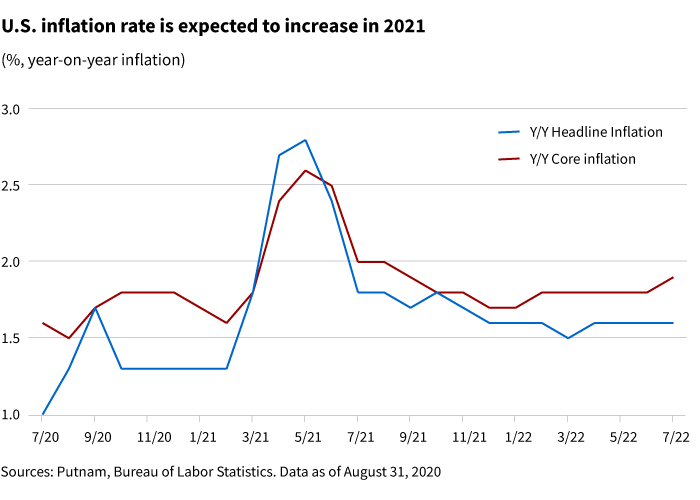 Against this backdrop, one has to wonder what changing a target actually amounts to. The Fed missed its old target; why wouldn’t it miss the new one? The new target makes a difference only if there was something about the old target that prompted an unwarranted tightening of monetary policy. Without tools to raise inflation, why should we attach much importance to a higher inflation target? Does the Fed have any new tools? There are tools other central banks have tried, but the Fed doesn’t like them. It does not think negative interest rates would be helpful in the United States. Yield-curve control is still under discussion in Washington. The Fed views quantitative easing (QE) as an effective tool, but clearer guidance on QE depends on the Treasury’s borrowing needs.

In addition, a new target means new scope for mistakes. What does average inflation targeting really mean? Over what period should we calculate the average? With an average target, the Fed is effectively asking for more discretion. That may be a good thing, or it may lead to more mistakes. This is relevant because the coronavirus pandemic has made it very difficult to ascertain inflation.

Distortions to prices from COVID-19

The pandemic is creating a range of different distortions. Some components of the Consumer Price Index (CPI) have been volatile in recent months. The pandemic, for one, has shifted supply and demand dynamics for products such as automobiles. Amid mobility restrictions, some of the big car rental companies moved to reduce their fleets. Used car prices declined in May and June. But as the economy stabilized, demand for autos recovered and auto manufacturers struggled to get their assembly operations up and running. Auto prices jumped 2.4% in July. These are very large swings, but there’s really nothing here that’s interesting or useful for thinking about inflation as a whole.

The CPI is designed to measure changes in the same basket of goods and services. The pandemic, however, has changed consumers’ buying habits. They aren’t buying as many airplane tickets or restaurant meals, or paying for hotel rooms. They are buying Netflix subscriptions. Other slower-moving changes in consumer behavior will affect measured inflation; people are moving out of rented urban apartments and buying suburban housing. This shift will have a persistent long-term effect on measured inflation. We also have to consider how the pandemic is affecting the value of what people buy and how this is missed by the ways the CPI is measured.

Despite these uncertainties, we believe the coronavirus shock is deflationary, or at least disinflationary.

Despite these uncertainties, we believe the coronavirus shock is deflationary, or at least disinflationary. The pandemic has done very little to the economy’s supply capacity; no hotels have disappeared, and the planes that are now out of service could be flying again in a matter of weeks. A lot of restaurants have closed, but the capital costs of reopening them are not barriers. There are some supply-side effects as business bankruptcies rise. That said, the impact on productive capacity has not been large overall. But demand has been affected, and early hopes that the economy would get back on track after a temporary downturn have proved to be misplaced. In this context, the immediate consequence of the Fed’s new framework is “lower for longer.” Beyond that, it is hard to be confident.