In January, the Federal Reserve maintained its benchmark federal funds rate in a range of 1.50% to 1.75% and tweaked two other key rates. The central bank lifted the interest rates on excess reserves (IOER) and the overnight reverse repo rate (RRR) by 5 basis points each. While Fed chair Jerome Powell called this a technical adjustment, policy makers essentially tightened the effective policy rate — the fed funds rate — by 5 basis points. That stance, however, could change amid intermittent financial market volatility as policy makers warn that China’s coronavirus could hurt the global economy.

In the aftermath of the global financial crises, the Fed initiated its asset purchase program, increasing the supply of reserves. At the same time, regulatory changes and more risk-averse bank management raised the demand for cash reserves. And the IOER paid by the Fed increased the attractiveness of reserve balances placed at the central bank. As a result, cash reserves and the interest paid on them — the IOER — became the main policy tools to determine the effective fed funds rate. On any normal day with sufficient liquidity in money markets, the IOER is the upper bound for the fed funds rate and the RRR is the lower bound. 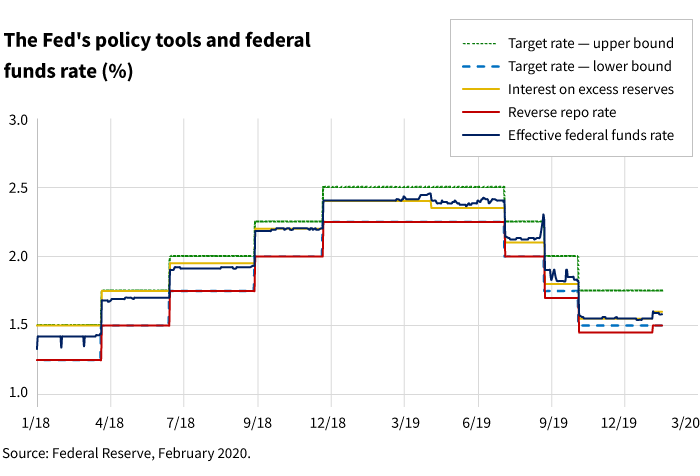 The shape of the yield curve is important for the smooth functioning of the financial system. Investors seek a term premium — the extra return that they expect to receive for the added risk of owning longer-term highly rated sovereign bonds. If a sovereign yield curve is inverted, parking funds in short-term government bills can be a safer bet than investing in longer-dated government securities. Moreover, riskier securities that offer a set of premiums have to compensate for the negative term premium by providing even higher expected yields. An inverted curve, in the end, induces a sell-off until asset prices are low enough — or the expected return is high enough — for investors to buy higher-risk securities. An inverted yield curve can also lead to involuntary deleveraging by leveraged investors as well as by consumers and corporations.

It is through the financial markets that monetary policy affects the real economy. Slowing global growth, rising financial market volatility, and an inverted curve could prompt policymakers to cut borrowing costs again. The vulnerability to shocks rises in a low-growth environment. Even if the coronavirus outbreak fades, another unexpected development is likely to hit the global economy and financial markets. A preemptive central bank eventually responds to sustained financial volatility.

Although the bar for an imminent cut looks high, the Fed could find itself between a rock and a hard place.

Although the bar for an imminent cut looks high, the Fed could find itself between a rock and a hard place. U.S. economic data is showing signs of stabilizing. Housing and other interest-rate sensitive sectors of the economy have picked up since the Fed cut rates in 2019. Manufacturing activity is also leveling off. Factors that are keeping manufacturing relatively weak, such as Boeing 737 MAX’s production halt and disruptions due to the coronavirus, are more transitory in nature.

Making the case for rate cuts

A central bank would not typically respond to short-lived developments. On the other hand, longer-lasting financial market stress can always find its way into economic activity. A forward-looking central bank can act to prevent market volatility from damaging economic growth. Since many FOMC members are likely hesitant to cut rates at this point, there may be a tug of war between the Fed and the financial markets until they reach a sustainable new policy rate.

The Fed may ease monetary policy using various tools. Policymakers may lower the target policy rates. They could use a combination of rate cuts, adjustments to the IOER and the RRR, and Treasury bill purchases. Using the traditional cuts as a gauge, we expect the Fed to reduce rates twice in 2020 by 25 basis points each time.