In many ways, the global economy at the end of 2015 is still struggling to define itself outside the financial crisis of 2008. Economic recovery has been uneven across the globe: The United States is moving right along; Europe appears to have just turned the corner into recovery; and China may be teetering on the verge of harder times as its head of economic steam is now dissipating.

Growth forecasts fall short of long-run averages
A careful analysis of growth patterns in developed-world economies shows that a recovery to higher growth rates is by no means impossible — particularly in the United States. But in our macroeconomic research, we also find that potential growth is likely to be lower than the long-run averages for a number of major developed countries due to structural economic impediments and population dynamics.

A qualified recovery emerges
Our research shows that the United Kingdom, Germany, France, and Japan are, with some qualifications, headed toward a recovery, but one that is below each country’s long-range “normal” economic growth rate. As the table indicates, our forecast for growth sees each country recovering approximately to its 1996–2004 average but remaining below its 1978–1995 average — with the exception of the United Kingdom, where the projected recovery situation is reversed. 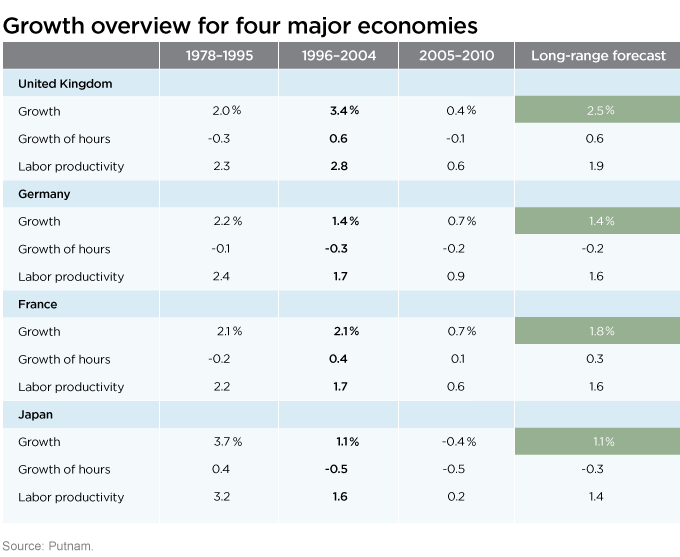 A mix of temporary and long-term issues
In all cases, the growth slowdown from 2005 to 2010, a period that includes the financial crisis and Great Recession, as well as some years of relative strength before the crisis occurred, appears to be severe. But if the demand side of each of the economies under examination is able to recover, we believe the slowdown will prove to be a temporary phenomenon. Put another way, we think the supply side of each of these economies may be able to respond to renewed demand and convert it to growth.

Breaking down labor productivity
Another immediately apparent factor we note concerns the impact of demographics on labor’s contribution to growth. As Figure 1 shows, growth in Germany and Japan suffers from a decline in the growth of hours worked, which is one of two major factors that our analysis identifies as a source of growth. As we discuss further in our published research, the second major factor of growth, labor productivity (LP), has three internally complex components: capital deepening (CD), labor quality (LQ), and total factor productivity (TFP).