The new terrain in capital preservation since money market reform

In 2016, the U.S. Securities and Exchange Commission completed reforms to regulations of money market mutual funds. Under the new rules, both prime retail and institutional funds can impose liquidity fees and/or redemption gates under specific circumstances. Government money market funds, which invest 99.5% of portfolio assets in government securities, do not.

However, DC plan sponsors might want to give stable value funds another look.

Stable value funds pursue capital preservation by investing in a mix of intermediate- and short-maturity fixed-income securities and contracts that are issued by insurance companies or banks. This is a key advantage, as the insurance contracts allow participant balances to be held at book value, which insulates participants from day-to-day fluctuations in bond prices. Furthermore, stable value funds can invest across the spectrum of investment-grade fixed-income sectors. In contrast, government money market funds, as mentioned above, must invest mostly in government/agency securities with short maturities.

These underlying differences in investments lead to portfolios that look very different by many metrics. Government money market funds have a maximum weighted average maturity of 60 days, while stable value funds have average maturities typically between two to four years. Despite these differences, stable value funds still offer the same level of principal protection as money market funds while historically providing a higher return as detailed below.

The benefit of using stable value as a capital preservation option

Over the long term, stable value funds have a performance advantage because they can invest in intermediate-maturity securities, which in most conditions, offer higher returns than shorter maturities. This key differentiator can be more or less advantageous, depending on the interest-rate environment. In 2017 and 2018, for example, the Fed raised rates seven times. As short-maturity securities earned higher returns, some of the performance gap between money market funds and stable value funds began to close.

However, the environment turned more favorable for stable value funds in 2019, as the Fed cut rates three times and the curve stabilized with a positive slope. 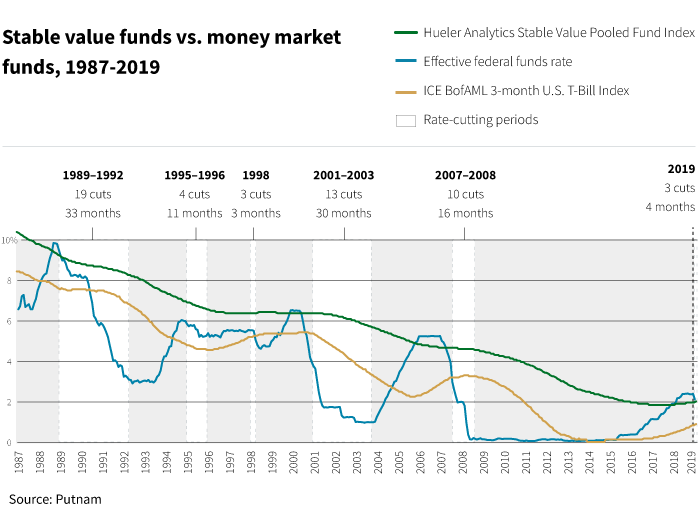 Furthermore, the historic volatility profile of stable value funds has been lower than money market funds and much lower than intermediate-term bonds. The chart below highlights the volatility of monthly returns over the past 30 years. The stable value category, as indicated by the green line, clearly shows a smoother return experience for participants over the long term. 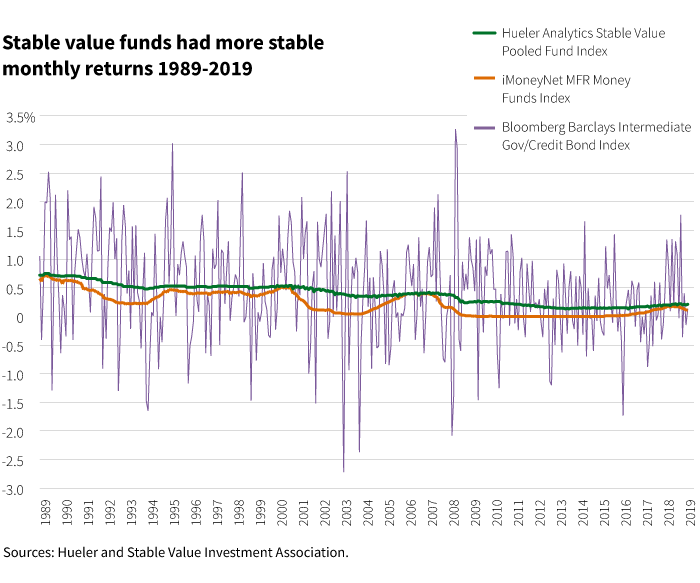 You can learn more about historical performance differences in Why stable value funds deserve a closer look on the Putnam DCIO Perspectives blog.

We also have a brief primer on GICs and answers to frequently asked questions about Putnam Stable Value Fund, which you can find at Putnam.com/dcio.