The fear of living longer than one’s retirement portfolio can support — longevity risk — is probably the most significant fear for retirement plan participants. The thought of being many years into retirement and seeing an account with a zero balance is a much more tangible concern than other hazards participants face. Examples of lesser-known risks include sequence risk, which could impair a portfolio at an early point in retirement, or inflation, which could slowly eat away at purchasing power over time.

The popular awareness of longevity risk showed in a recent EBRI study: 68% of the surveyed retirees believed it was “very likely” or “somewhat likely” that they would live at least until age 85. While it is an understandable fear, a hard look at the data would suggest people often overestimate their own longevity risk. To see this, let’s consider life expectancy data from the Social Security Administration Life Table. It suggests that, conditional on reaching retirement age, men have only a 44% probability and women a 56% probability of living to age 85. The data also suggest this risk is more easily addressed through participant action, not the glide path design of the investment manager.

Data from sources such as the SSA are common inputs that target-date managers use in assumptions around life expectancy. For example, to aid in constructing a glide path, a manager may use the following assumptions: a retirement age of 67, a subsequent 25-year retirement window, and a life expectancy of 92. 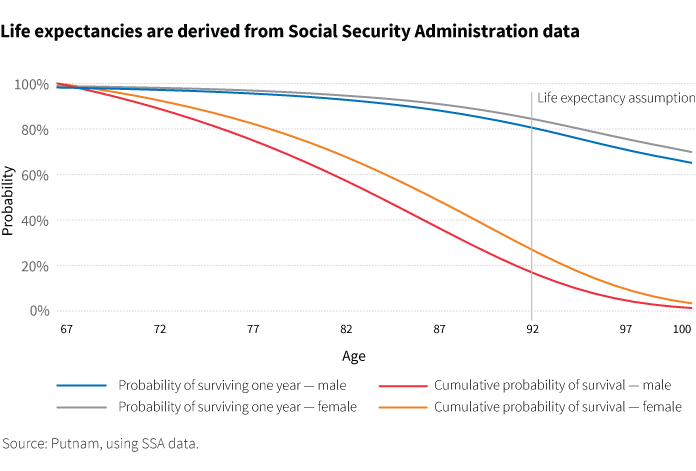 While, based on this data, 20% is the highest possible proportion of individuals that could face longevity risk, the proportion of plan participants that could likely face longevity risk is considerably lower. Based on simulations as outlined in a recent Putnam white paper, the joint probability of living beyond 92 and having less than 2.5 years’ worth of withdrawals is only a shade over 1%, which is hardly a majority.

In addition, longevity itself does not affect all plan participants equally. The SSA has found evidence that socioeconomic status plays a role in determining life expectancy (Waldron, 2007). If the individuals who are most likely to outlive an assumed life expectancy are also more likely to save more, or more likely to require lower income replacement as a result of their higher socioeconomic status, then the impact of longevity risk will be muted. Additional evidence suggests a heritability in longevity (Herskind, et al, 1996 and Kerber, et al, 2001). Hence, while we can inform our life expectancy assumption based on SSA data, each individual participant might be able to determine his or her own longevity risk more accurately based on genetic predisposition.

Options for participants and investment managers to address longevity risk

Saving more is the single most important variable that can increase the probability of a successful outcome for plan participants, no matter how long they might live. Furthermore, by working longer, plan participants can increase contributions to enhance portfolio growth and decrease the amount of time their portfolio needs to produce income in retirement. If longevity risk is a major concern, they can purchase a longevity income annuity (LIA), which more directly hedges longevity risk by providing guaranteed deferred income. They could even use retirement savings to purchase an LIA.

The only way the investment manager can attempt to address longevity risk, however, is by increasing equity allocation throughout the glide path. Unfortunately, doing so is fraught with risk, as it necessarily increases sequence risk for all plan participants, especially later in the glide path.