As a college student studying economics, I learned the theory of comparative advantage and the benefits of free trade. In theory and reality, free trade increases the availability and quality of goods and reduces prices, resulting in higher growth. Overall, tariffs and trade wars create inefficiencies and a deadweight loss for consumers and governments. However, trade policies also create winning and losing companies within industries. We attempt to find new opportunities for Putnam Emerging Markets Fund and we are eyeing potential new winners in China.

China’s economy grew in the 1990s and early 2000s by leveraging its low-cost labor force to become the world’s factory for cheap, low-quality goods. At the same time, Chinese consumers and corporations also viewed international brands to be of higher quality. Both of these trends are changing rapidly today, partly because of U.S.-China geopolitical issues. The trends have accelerated rapidly during the current COVID-19 crisis.

There has been a rapid shift in consumer preferences in favor of domestic brands.

Two clear themes have emerged this year as our analyst team has had nearly 100 calls with the management teams of Chinese companies. First, there has been a rapid shift in favor of domestic brands. Second, the Made in China 2025 initiative is creating enormous shifts in market share within the technology and healthcare sectors.

Chinese brands are taking share from international brands across nearly every sector. Our channel checks with management teams suggest that these trends accelerated in the second half of 2019 and the first half of 2020. By comparison, 85% of Chinese consumers preferred international brands to domestic brands in 2011. Today, consumers prefer domestic brands in nearly every category, according to a recent survey by McKinsey.

We see four main reasons why Chinese consumers are switching to domestic brands: 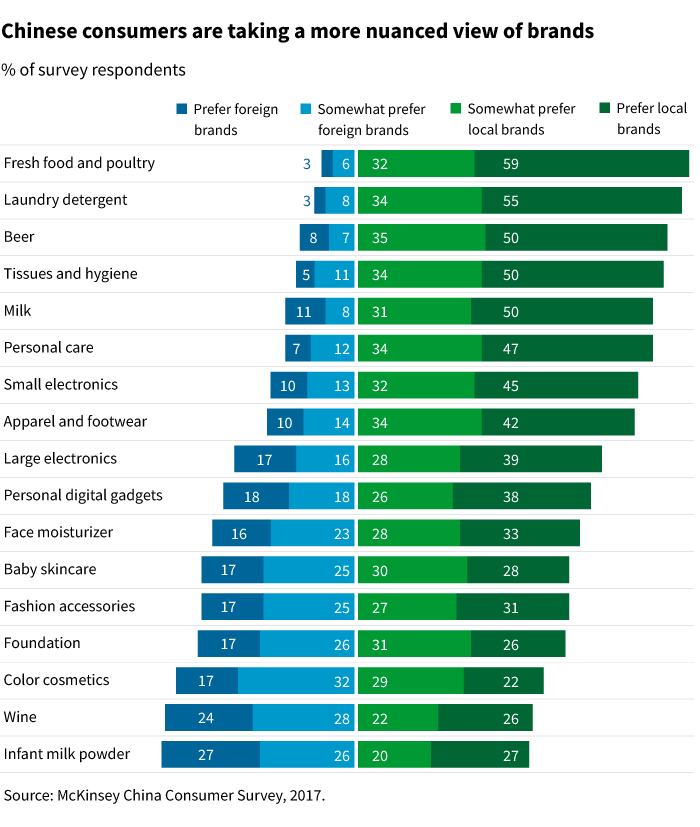 How a cosmetics company seizes opportunity

In large categories such as cosmetics and infant formula, the shift in consumer buying behavior is creating enormous growth opportunities for domestic brands. We explored this theme when we spoke to the management team of Putnam holding Proya Cosmetics in July. Proya generated just $500 million in cosmetics revenue last year. Global leader L’Oreal had $33 billion. However, we believe the Chinese firm has several competitive advantages. First, management is focusing distribution outside of Tier 1 cities where multinationals devote all of their attention.

Second, the company has brought its e-commerce presence in house, unlike the multinationals, which rely on outside vendors for this critical function. As a result, both Proya’s followers and online streaming content across key e-commerce channels are significantly over-indexed versus global peers. Tracking these data points in real time is a way to gain an edge in this undiscovered name. In spite of COVID-19, we anticipate the company’s revenue is poised to grow over 25% this year and Proya will compete in a large addressable market of $150 billion.

Made in China 2025, owing to both the trade war and the nation’s historical reliance on international technology, is one of the government’s highest priorities. The goals include increasing domestic-made content of core materials in key industries such as pharmaceuticals, aerospace, and information technology. The target is to nearly double the levels, from 40% in 2020 to 70% in 2025.

The goals of Made in China 2025 include increasing domestic-made content of core materials in key industries.

To pursue this goal, China has invested in developing human capital. China now graduates more engineers than the United States and earns more international patents. China is now producing best-in-class healthcare technology. Local governments are incentivizing hospitals to buy from domestic firms. In May, Andrew Yoon, my fellow Portfolio Manager on the fund, and I met with the management team of Mindray, a portfolio holding. Mindray is the leading medical devices business in China. We wanted to better understand how these seismic shifts would impact the growth algorithm of the business.

Specifically, medical devices are a top-10 target for China. The government is mandating 50% market share in hospitals by 2020 with this figure increasing until 2025. Mindray is already a great business with a team of 2,200 engineers and distribution covering 110,000 medical institutions. However, management indicated that this policy change should drive a step change in its growth.
Mindray had approximately 10% market share of the more than $1 billion ultrasound market in China. GE Healthcare and Philips dominate this industry globally with over 50% market share. However, we expect their share within China will shrink to less than 10% over the next 10 years, creating an enormous market opportunity for local players. In spite of the COVID-19 crisis, Mindray’s revenues are poised to grow over 25% in 2020.

As major spending shifts happen in China, we are using insights from our meetings with company management teams to position the fund in companies we consider to be new winners.

As of June 30, 2020, Shenzhen Mindray represented 1.04% of assets in Putnam Emerging Markets Equity Fund. TikTok, WeChat, Proya Cosmetics, L’Oreal, GE Healthcare, and Philips Healthcare were not held in the fund, but may have been added to the portfolio at a later date.