Since the election in November, the markets have pushed bond yields higher in anticipation of stronger growth and higher interest rates. While investors typically focus on the risk that higher rates pose to fixed-income investments, it’s important to remember that rates can pose a risk to some areas of the equity market as well.

Several equity sectors act like “bond proxies” because they generate income, such as dividends. While this term might be familiar to investors, many may not be aware of research that quantifies the magnitude of how sectors of the stock market may react when interest rates change.

Breaking down risks by sector

One way to illustrate interest-rate sensitivity in stocks is by examining the volatility of equity sectors versus Treasuries during past periods of rising rates. It’s possible to examine this by studying beta, a statistical measurement of the volatility of a security or group of securities relative to an index that represents a broader market. Beta allows us to understand whether a security has performed with more or less volatility than the overall market. What’s more, beta can tell us whether a security is positively or negatively correlated with the market. For example, a positive beta suggests a security generally moves in the same direction as the market, while a negative beta indicates a security tends to move opposite to the market.

The table below illustrates the sensitivity of the 11 industry sectors of the S&P 500 Index to interest rates (the Bloomberg Barclays (BBG) U.S. Treasury 7-10 YR TR Index) over the past 5 years, once equity market sensitivity is removed. This is an example of a multi-factor model.

At the extremes, sectors such as real estate and utilities have calculated betas to the Treasuries benchmark ranging from +1.58 to +1.50. These characteristics should come as no surprise to investors who are familiar with REITs (Real Estate Investment Trusts) and utility companies, which tend to use debt rather heavily and rely on dividends to be an important component of the total return that they provide to investors. By contrast, financials and energy have had betas ranging from -0.97 to -0.43. 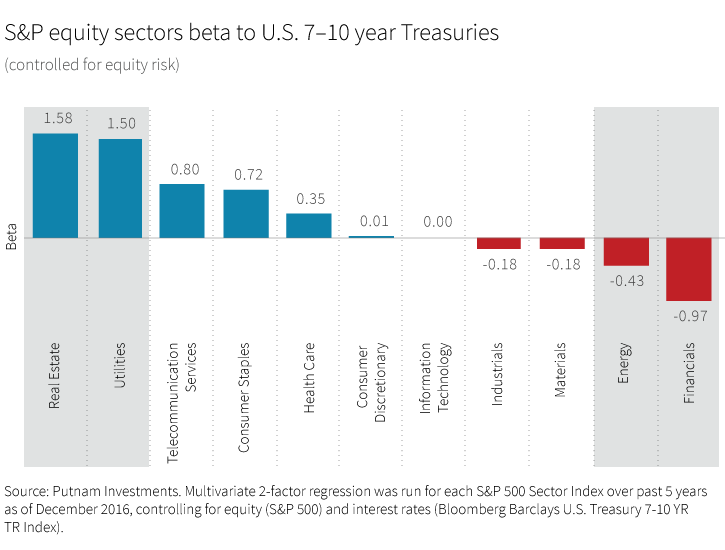 A multi-factor analysis allows us to examine the performance of equity sectors by isolating different types of risk that correlate with stock price movements. For example, factor analysis can separate out the impact of overall market movements and allow us to focus on how sector performance varies relative to interest rate movements.

Controlling for broad equity market risk, then, the data indicates that over the past five years, investments in sectors such as real estate and utilities have been more sensitive to moves in interest rates than Treasuries (as measured by the 7-10 year index) have been. Real estate stocks, for example, lost ground when interest rates increased, and moved by a greater amount than Treasuries — approximately 1.58% versus a 1% change in the BBG U.S. Treasury 7-10 YR TR Index.

On the other hand, financials stand to benefit

Financials, in contrast, have benefited from interest rate increases. The data indicates a -0.97% move for financials for every 1% change in rates (the negative beta for financial stocks means that stock prices move in the opposite direction of bond prices, which fall when yields rise). This relationship makes sense given that the business model of financial companies is to derive a substantial portion of revenues by lending over longer periods. Many financial companies fund themselves at the shorter end of the yield curve while lending at the longer end of the curve, and a steeper curve increases the spread on their lending activity, improving their revenue streams.

To get a sense of what a move in yields could mean for the 11 S&P 500 sectors given the differences in these sensitivities, the table below highlights the impact on return that varying increases in yields (if in isolation from other factors) would have across the 11 S&P sectors. 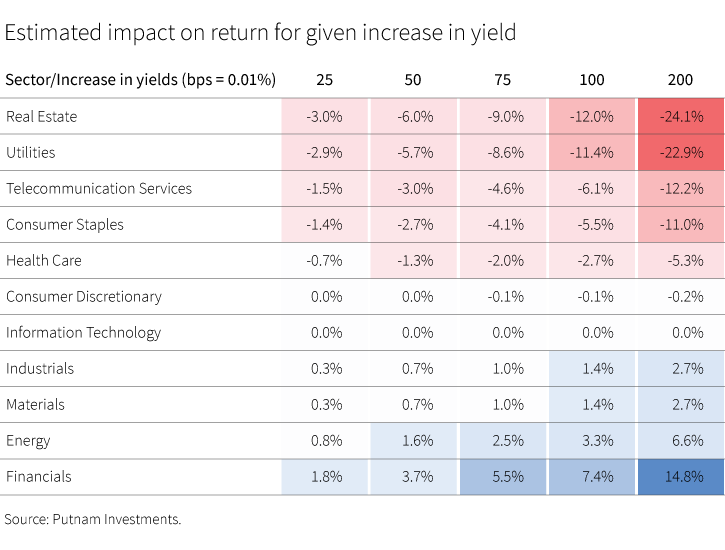 A 1% increase in yields for example, could have an estimated impact of -12.0% and -11.4%, respectively, for the real estate and utilities sectors. In contrast, the financials sector could benefit by +7.4%.

Consider sector risk among other factors