The financials sector has been among the hardest hit from the COVID-19-induced equity market selloff, underperforming the Russell 1000 Value Index considerably in the first quarter. This pain has been particularly acute as lower interest rates pressure net interest margins — the difference between interest earned and interest paid on loans and deposits. Also, the deepening economic malaise has raised concern over credit from consumers and corporations alike. The financials sector — and banks in particular— tends to have very high sensitivity to the macro economy.

It is important to note that the U.S. financials sector was in considerably better shape coming into this crisis than it was for the 2008/09 global financial crisis. With that crisis, irresponsible lending and leverage exposed insufficient capital levels and caused systemic failures. Today, U.S. banks are very well capitalized as a result of much stricter regulation, and they are part of the solution to today’s crisis, rather than the cause, as they were in 2008. There is no concern in the market around capital levels, and the largest U.S. banks are maintaining their dividends, unlike many of their global peers. Deposits to the largest four U.S. banks have increased by over half a trillion dollars since the onset of the pandemic crisis. These banks are playing an essential role in transmitting Federal Reserve and Treasury policy into the markets. 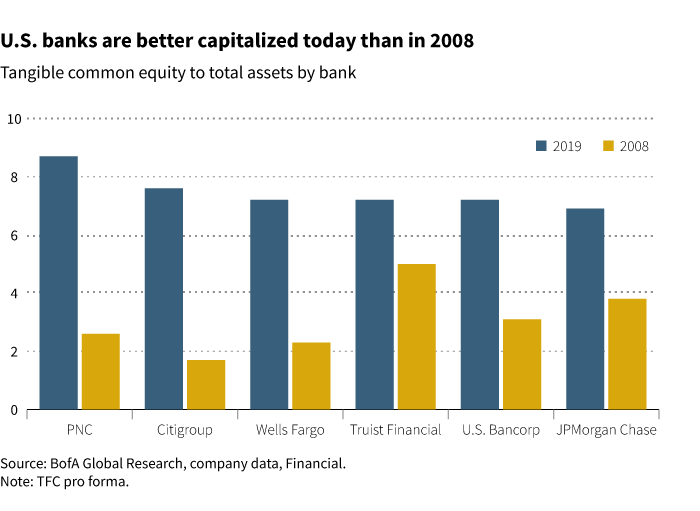 There is no concern in the market around capital levels, and the largest U.S. banks are maintaining their dividends, unlike many of their global peers.

There is certainly increasing risk around credit, and we have seen most of the largest financial institutions reserving enormous sums in anticipation of future loan losses. The largest four institutions put aside almost $25 billion in the first quarter. This has materially lowered earnings, but has also anticipated terribly adverse economic scenarios. These reserves are likely to continue to build in the coming quarters, but visibility remains very low. Policy actions have been historic in both their size and the speed at which they have come to market. They represent a metaphorical “bridge loan” to the U.S. economy, both at the corporate and the individual level. Importantly, in setting aside reserves, none of the major banks have accounted for potential stimulus, either fiscal or monetary, to lighten the losses they incur through the crisis.

In setting aside reserves, none of the major banks have accounted for potential stimulus to lighten the losses they incur through the crisis.

Some industries will be hurt more than others

The impact of the crisis will have varying effects on industries within the financials sector. For example, credit card businesses have set aside the most in reserves. This is because the uncollateralized nature of this type of lending makes it considerably more vulnerable to future losses than, for example, a loan to a high-quality corporation with a strong balance sheet. On the other hand, many of the market-related businesses, such as trading and investment banking, have seen considerable increases in momentum on the back of the crisis. In short, there is no “one size fits all” narrative around the effects of the COVID-19 crisis on the financials sector.

The depth and duration of the recession and eventual shape of the recovery will matter most to the sector. The high level of uncertainty around the pandemic crisis is precisely why we have seen the U.S. financials sector underperform the broader market. While many of the largest banks remain profitable and well reserved, we are maintaining underweight exposure to the broader financials sector in our portfolio, relative to the benchmark. In the final analysis, financials have higher sensitivity to market and macroeconomic declines, but they will also have higher sensitivity to a return-to-normal scenario. We believe banks are trading at very reasonable levels relative to their tangible book value.

Consider these risks before investing: Value stocks may fail to rebound, and the market may not favor value-style investing. Income provided by the fund may be reduced by changes in the dividend policies of, and the capital resources available at, the companies in which the fund invests. The value of investments in the fund’s portfolio may fall or fail to rise over extended periods of time for a variety of reasons, including general economic, political, or financial market conditions; investor sentiment and market perceptions; government actions; geopolitical events or changes; and factors related to a specific issuer, geography, industry, or sector. These and other factors may lead to increased volatility and reduced liquidity in the fund’s portfolio holdings. You can lose money by investing in the fund.