In almost all places around the world, we have now entered a new phase. As mobility restrictions have eased, economic activity has started to recover. The global economy is growing at a decent pace as the worst effects of the shutdowns pass. Still, the lasting damage from the downturn is not yet really evident, and there remain important constraints on the recovery. We continue to think a “V-shaped” recovery is very unlikely, although there will be bursts of more rapid growth. 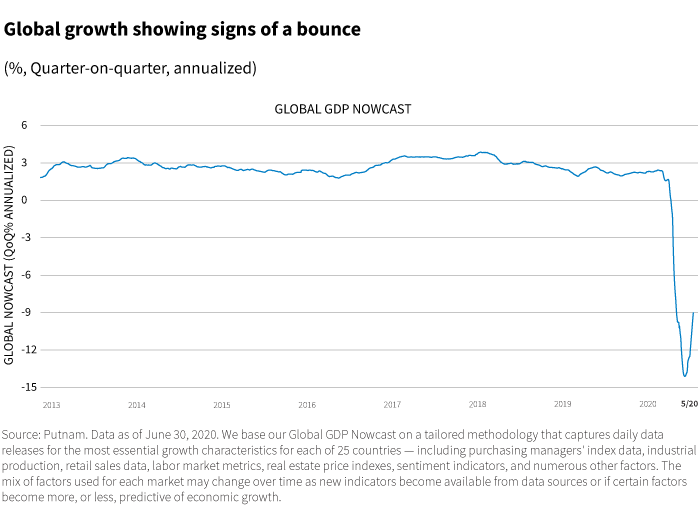 Businesses and consumers adapt to a new world

Against that backdrop, on the supply side, many firms have been able to adjust their working processes to reduce risks of transmission among their labor force. On the demand side, spending patterns have changed dramatically, but overall spending rose from the trough in the spring. There has also been a surge in coronavirus infections around the world. Some countries have implemented selective shutdowns while others are using “trace and isolate” measures. But no country has attempted to impose a wholesale return to the policies of the spring. The new measures are much more selective in their impact on the economy and are best seen as constraints on growth, rather than new sources of downward pressure on activity.

Households have been making adjustments to deal with the risks from the virus. These adjustments have been dramatic; the drop in demand for flights was spectacular. At the same time, COVID-19 cases have increased in many of the states that relaxed restrictions. Credit card data suggests that states with the fastest growth in spending on restaurants are states that have the highest growth in caseloads. As a result, some states are slowing the pace of their reopenings. The important question is how households will react to the re-emergence of higher infection rates. It is in the interaction between health regulations, policy, and household behavior that we find the key to the outlook.

One important question in this context is what households respond to: Are they more worried about case counts, hospitalization rates, or death rates? As we analyze the data, it appears that case counts matter the most. For some people, the disease seems to be quite minor; for others, it’s serious. Fatalities are concentrated among the old and the ill. As this becomes clearer in the future, household responses may become more nuanced.

PMIs are not the whole story

We do not believe that wholesale lockdowns will return. Many states are putting in place more targeted measures such as restricting bars, restaurants, and other indoor places. Future relaxations are going to be slow. The easing of mobility restrictions has allowed for an increase in production activities. The argument about the “V-shaped” recovery has to be seen in this light. The biggest evidence for a “V-shaped” recovery is the bounce in global purchasing managers’ indexes, or PMIs. But PMIs are diffusion indices; improvements do not indicate a significant turnaround. To get a real “V” in the economy, PMIs would need to be dramatically higher.

We attach more importance to demand. If demand changes, supply will eventually follow.

We attach more importance to demand. If demand changes, supply will eventually follow. Some components of demand look good for two reasons. First, the “work at home” economy is functioning more or less normally, with wages being earned and spent. Demand patterns, however, are a bit different. Demand has shifted from services to goods, and, in turn, boosted retail sales. That makes demand for goods look strong. However, it would be wrong to see the strength of demand for goods as indicative of demand as a whole.

The need for fiscal stimulus

Second, large-scale fiscal stimulus is supporting household incomes and helping to offset the loss of wages during the lockdowns. The resilience in demand and reopening of supply chains have produced some data that has encouraged proponents of the “V-shaped” recovery. But there are two reasons for caution. The first is overall fiscal policy, the upcoming “fiscal cliff,” and the prospects for a new round of fiscal stimulus. Washington is focusing on this now.

It’s likely that the small business paycheck protection program will be extended, and there will be some money for states and municipalities. Households are also likely to get income support, but it is likely to be a small part of an overall smaller package. This means household income will become more dependent on the labor market. So, we are back at the second reason for caution about household demand growth: the resurgence of the virus in a large number of states. How are households reacting to this? It seems pretty clear that some households are adjusting their behavior.

The recovery will struggle to maintain a decent pace until households perceive much lower risks from certain types of employment-generating activity. In addition, the lockdowns have resulted in an increase in business losses and defaults. So far, the effects of these losses have been mitigated by the amount of policy support, but the problem has not gone away. Either policy support will need to be increased again or these losses will reverberate around the economy.