The debate surrounding an active manager’s ability to produce positive alpha leaves people impassioned on both sides. Critics of active management argue that the majority of active managers have failed to consistently outperform a benchmark index (e.g., Ellis 19751; Bogle 19982). Other research has found that both superior and inferior fund performance has tended to persist over one-year investment horizons (Brown and Goetzmann 19953). A recent Putnam study4 analyzed 30 years’ worth of performance of multi-asset funds and found that the average manager produced positive alpha of 1.09% (annualized) after controlling for several risk factors.

While that information is helpful in building a case for why investors should consider multi-asset funds in broader portfolio allocations, it masks the performance discrepancy between the winners and losers. Additionally, it does not directly answer what types of characteristics an investor should look for when selecting a multi-asset fund, and how it may improve one’s chances of selecting the right manager. To begin to answer these questions, we chose to test whether there is any persistency to alpha generation on a forward-looking basis, following a similar process outlined by Harlow and Brown 2006.5

A method for discerning predictability

While studies have looked at several fund characteristics, our analysis focused on using past alpha as a predictor for future alpha. To better mimic the options an investor would have had historically, we only used the oldest surviving share class for each unique fund. Using the trailing five-year alpha from Putnam’s recent study as the independent (predictor) variable, we then compared that with a new alpha term, based on a one-year regression on a forward-looking basis. For example, trailing five-year alpha ending December 1990 would be compared with a new one-year alpha calculated using data from January through December 1991. Using a time series that starts at the end of December 1990, funds were sorted into quintiles and compared with the one-year forward alpha. Quintile 1 refers to the 20% of funds with the highest past alpha, while quintile 5 refers to the lowest 20% of funds. The portfolio formation process was repeated on a monthly basis through December 2016, while one-year forward alpha was also calculated in a similar manner though December 2017. Chart 1 plots the average one-year forward annualized alpha based on starting quintile, revealing a monotonic relationship. These results are consistent with other studies and would indicate that there is some performance persistency of alpha, both positive and negative, up to at least one year. 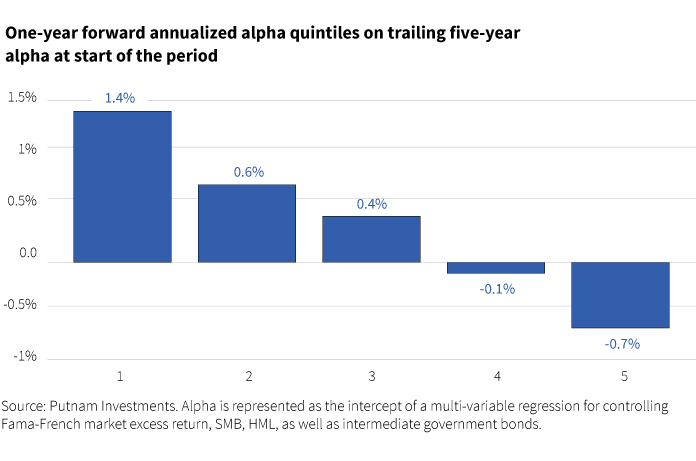 Applying results to an investment strategy

Given these results, it’s logical to consider establishing an investment strategy that ranks multi-asset funds based on past alpha generation. A simple strategy that consistently bought the funds ranked in the top 20% based on past alpha, and held those funds for one year, would have been expected to deliver 1.4% of annualized alpha. Additionally, that strategy would have produced positive alpha 65% of the time. Though there are practical limitations to implementing this exact strategy, as investors are confronted with challenges such as a fund being closed for investment, it is worth noting that implementing a strategy based on the top quintile is not a severe restriction given the number of unique multi-asset funds. Chart 2 shows the number of funds that ranked in the top quintile, starting in December 1990 and running through the end of 2016. At the end of 1990, an investor would have had the ability to choose from 10 funds that ranked in the top quintile, while at the end of 2016, that number was 107. 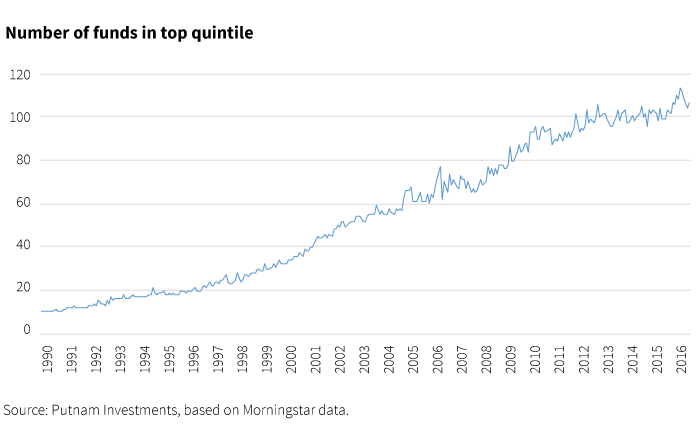 Selecting a fund manager is a daunting challenge because there is no way to know which managers may perform best and there are many considerations besides performance. One somewhat obvious objective is to select a manager that will provide positive value, or alpha. It is by no means the only factor an investor should rely on, but as it pertains to multi-asset funds, the results of this analysis suggest that investors would be well served incorporating past alpha generation when screening the universe of available investment options.