For municipal bond investors, the past 12 months have been quite rewarding, but there could be challenges ahead. The Federal Reserve’s dovish pivot on interest rates, slowing domestic and global growth, and stable credit fundamentals have led to lower rates and tighter credit spreads. The yield on the Bloomberg Barclays Municipal Bond Index declined by more than 140 basis points (bps) in 2019, resulting in a total return of 7.54%. This strong performance presents a challenge going forward for income-oriented investors. Record low interest rates, historically tight credit spreads, and a relatively flat yield curve leave fewer paths to returns. 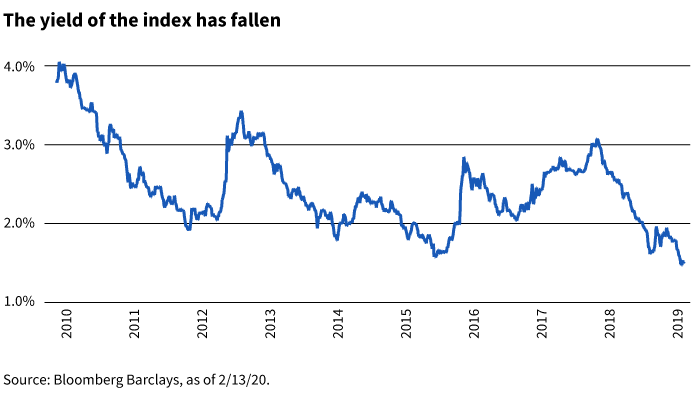 With price appreciation unlikely to lift returns to the same degree, investors might try to reach for more income by, for example, increasing portfolio duration or reducing credit quality. We think there is a more thoughtful alternative that doesn’t require adding more interest-rate or credit risk.

We think strategies to benefit from changes in the yield curve offer the most attractive way forward. The municipal bond yield curve is very flat by historical standards. Investors earn little more by investing in a long-maturity bond than they do from a short-maturity bond. This is unusual. In fact, 92% of the time over the past 25 years, the yield curve has been steeper than it is today. Markets have rarely paid investors so little to take more risk. This makes the prospect of searching for income by reaching out farther on the yield curve all the more perilous. 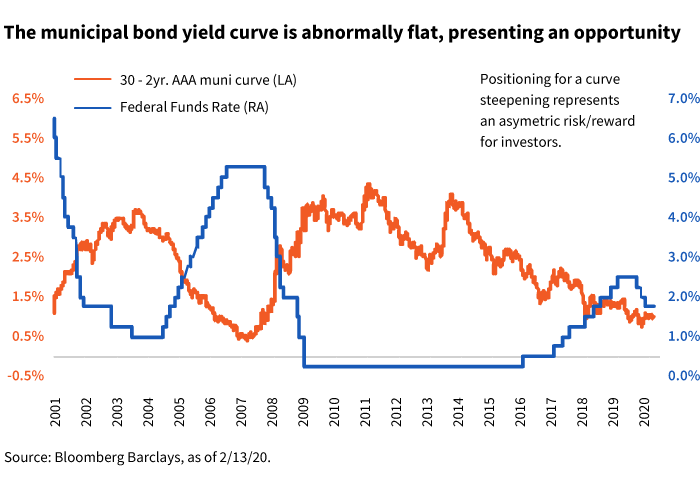 Our base case scenario is that the U.S. economy is stabilizing and a recession is unlikely over the next 12 to 18 months. We also believe that term premiums (the extra yield that investors receive for the added risk of owning longer-term bonds) are too compressed given the strength of the economy. The market is too pessimistic on future growth and inflation outcomes. The resolution of this inconsistency would be a reflating of the term premiums. The consequence would be a re-steepening of the yield curve as the market prices in stable or higher growth and the potential for higher inflation.

In an alternate scenario, economic growth could slow or contract. Under this scenario, we expect the Fed would move to ease monetary policy by reducing short-term interest rates. In the past, such a move has resulted in a steepening of the yield curve.

Benefitting from a steeper curve

In either case — continued growth or economic deterioration — we expect to see a steeper yield curve. In this context, we think we can provide a competitive yield and preserve capital at the same time.

We favor strategies that offer returns from a steepening curve. Our aim is to offset the risk of accelerating growth, inflation, and higher long-term interest rates that are part of our base case scenario. The strategy also offers return potential in the event the economy or inflation surprises to the downside.

Learn more at Putnam.com about tax-exempt income and how we invest.

For additional insights, advisors are welcome to register for our webcast “Utilizing munis in today’s market” (March 12 at 1:15 p.m. Eastern Time) with Portfolio Managers Paul Drury and Garrett Hamilton.