Amid slowing economic growth and the Federal Reserve tightening monetary policy to combat inflation levels not experienced since the early 1980s, many investors believe it is likely that the U.S. is on the cusp of entering an economic recession. Our analysis looks at how the S&P 500 Index has performed during each U.S. recession since the mid-1950s.

We use data from the National Bureau of Economic Research (NBER) to identify recessions. The NBER defines a recession as a significant decline in economic activity that is spread across the economy and lasts more than a few months. The committee that determines if an economic downturn classifies as a recession uses a range of criteria to determine its start and end dates, and often does not declare that the economy is in a recession until after it has already ended.

The table below displays the magnitude of earnings degradation, multiple compression, and maximum drawdown for the S&P 500 Index in each of the previous 10 recessions. 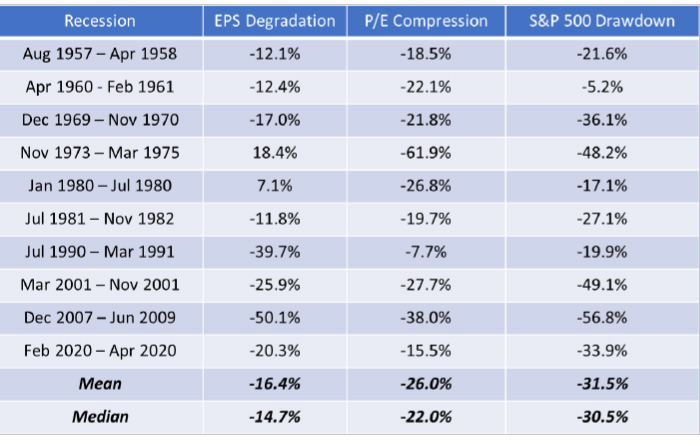 On average, S&P 500 earnings decline 16.4% in recession. Notably in two of the last ten recessions, there was no decline in index earnings. In the 1973–1975 and 1980 recessions, earnings at the index level actually grew. Both of these periods had high and rising levels of inflation, which likely kept nominal earnings growing for large U.S. companies.

The average P/E compression was 26.0% and the S&P 500 Index multiple declined in each of the recessionary periods.

The average S&P 500 drawdown is 31.5%. The index entered a bear market (generally defined as at least a 20% peak to trough contraction) in seven of the ten periods.

During recessions, U.S. companies typically encounter sharp contraction in earnings, P/E multiples, and price. The last ten recessions each had drawdowns in the S&P 500 price level and P/E multiple, while earnings declined in eight of the ten recessions.

Earnings per share growth is slowed, but it is still positive. We anticipate further earnings degradation in 2023. This is something to be mindful of as we enter 2023.

The S&P 500® Index is an unmanaged index of common stock performance.

You cannot invest directly in an index.