Lawmakers have one and only one job for the next several weeks, and it is avoiding the fiscal cliff, first, by identifying those issues that are the root causes of our fiscal distress and, second, by doing the hard work of consensus building to pass legislation that offers meaningful change.

The political posturing on both sides of the aisle about whether and how much to raise marginal income tax rates on the wealthiest Americans is a distraction from the deeper, long-term issues at stake. The non-partisan Congressional Budget Office estimates that letting the Bush-era tax rates expire for households earning more than $250,000 would generate an additional $46 billion in annual revenue — which would be enough to fund government spending for less than a week. Haggling over whether the top tax bracket is 30% or 40% does little to solve the crisis we are in. Entitlement reform could.

Since the end of WWII, federal revenues have equaled about 18% of GDP while outlays have steadily grown, resulting in mounting deficits, year after year. Everyone agrees the trend is unsustainable. But not everyone appreciates the urgency of the need to act: Within the next 35 years, entitlement spending will consume 100% of historical tax revenues. Fully 18% of GDP — which represents the historical average of federal tax revenues since WWII — will be spent on Social Security and the trio of medical programs: Medicare, Medicaid, and Obamacare. Every dollar we allocate for education, defense, infrastructure, and transportation would therefore have to be financed by increasing our national debt or significantly increasing tax revenues beyond the 18% of GDP threshold. 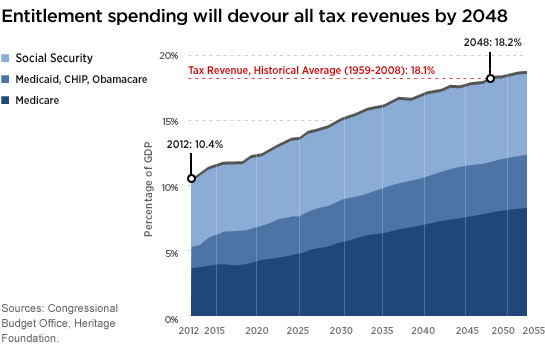 This is a surefire recipe for financial ruin. The good news is that our nation’s leaders have every opportunity to avoid it, beginning with reforming Social Security. Today, Social Security represents the largest single component of entitlement spending, and with 10,000 baby boomers retiring every day, we can’t afford to kick the can any further down the road. Since 2010, Social Security outlays have exceeded the income taken in — a trend the program’s trustees foresee will continue, absent reform, indefinitely. To quote from their most recent report to the public, “under current projections, the annual cost of Social Security benefits expressed as a share of workers’ taxable earnings will grow rapidly from 11.3 percent in 2007, the last pre-recession year, to roughly 17.4 percent in 2035.” Failure to reform Social Security ensures either the exhaustion of the system’s trust fund by about 2033 and a 25% cut in benefits, or a major tax increase, or both.

It doesn’t have to be this way. Of all the entitlement spending programs, Social Security is by far the easiest challenge to meet and, I believe, one of the programs most worth saving. A product of the Great Depression, Social Security was designed to help prevent our senior citizens from spending their final years living in poverty. Today, millions of Americans count on it as a pillar of their retirement plans. But if legislators continue to postpone necessary changes to the system, Social Security will be unable to deliver the benefits “promised” today.

Preserving the system requires making modest changes at the margins and, as though more incentive to act were necessary, Congress already has a sensible, bipartisan plan for Social Security solvency in the Simpson-Bowles report. The President’s own National Commission on Fiscal Responsibility and Reform recommends a number of steps to ensure Social Security’s solvency for today’s retirees and for future generations, including gradually increasing the retirement age in step with longer life expectancies, tying future benefit increases to a figure that more accurately reflects cost-of-living increases, and gradually raising the ceiling for earnings subject to Social Security payroll taxes.

Every American who cares about the fiscal health of this country should ask his or her representative to support Social Security reform now. It is a sad commentary on the political climate of our times that Alan Simpson and Erskine Bowles presented their recommendations more than two years ago, and their colleagues on Capitol Hill and Pennsylvania Avenue have done nothing with them.

The title of their report from 2010 was “The Moment of Truth.” With the truth now long since told, we have reached a new moment in time, an opportunity we cannot afford to miss: the time for action.