An extremely sharp global downturn is unfolding as the coronavirus pandemic takes a toll on economic activity. The U.S. economy is heading into a recession — abruptly ending an 11-year expansion — as lockdowns hurt work, businesses, and travel. This economic crisis has elicited unprecedented measures from policy makers. The Federal Reserve slashed interest rates to near zero, extended terms on emergency loans to banks, relaunched a financial-crisis-era commercial paper tool, and threw other lifelines across the bond markets.

It is clear that the U.S. economy is under considerable strain. Social distancing, whether it’s being required or encouraged by various levels of government or employers, or whether people are doing it voluntarily, has dealt a serious blow to demand. An estimated 90% of the U.S. population is now under some kind of “stay at home” measure. So, as demand falls, firms reduce employment. Restaurants, hotels, sports, and a whole raft of related sectors are contracting rapidly. U.S. employers shed more jobs in March than in any month since March 2009. Payrolls declined by 701,000 jobs last month, and the unemployment rate rose to 4.4% from 3.5% in February, according to the Labor Department.

We are certainly in a recession, although, strictly, we will have to wait for the National Bureau of Economic Research to confirm this.

First-quarter GDP will show a fall, but it may not be large because economic activity was stable in January, February, and during the first days of March. The second quarter will, however, show a large contraction. We are certainly in a recession, although, strictly, we will have to wait for the National Bureau of Economic Research to confirm this. The bigger questions are when the economy might show some signs of stabilization and what kind of improvement we might see in the second half of 2020. 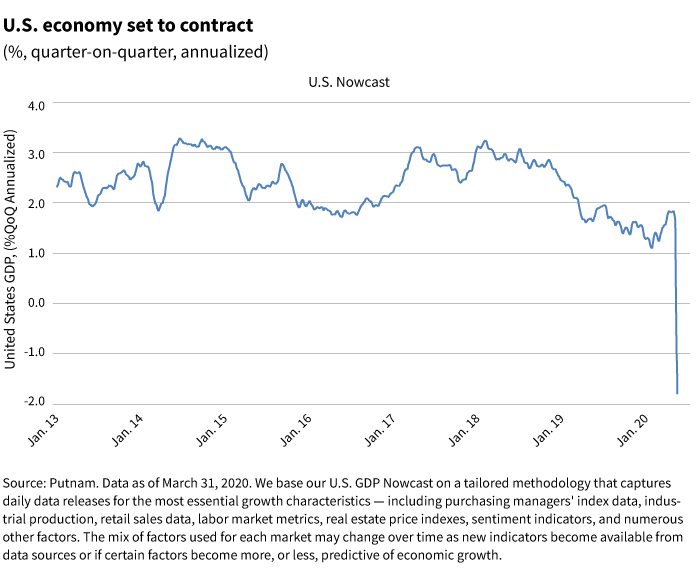 Policy options will play a big role in the recovery. This has been a policy-induced recession; restrictions on movement and social interaction caused effective demand to collapse. Financial markets also tumbled, and risk appetite plunged in March, the second worst month since 1980. Investors piled into safe-haven U.S. Treasuries despite dislocations in the market. The policy response has been rapid and has reduced the liquidity risk and separated it from solvency risk.

This has been a policy-induced recession; restrictions on movement and social interaction caused effective demand to collapse.

The Fed took the lead, reactivating the alphabet soup of special facilities that was used in the 2008–2009 financial crisis and reapplying the basic model to come up with a few more. The size of the Fed’s war chest, and its flexibility in deploying its authority, gives us some comfort that the stresses we saw in Treasury markets and at the front end of the yield curve have abated. In addition, Congress approved a historic $2 trillion stimulus package intended to rescue the economy.

For the most part, the fiscal responses have been quite well targeted. The main concern has to be to try to compensate households and corporations for the loss of income that comes with the collapse in demand in order to short-circuit a self-reinforcing cycle of lower employment, lower household income, debt default, financial stress, and acute social distress. The United States will have to do more to help out states and municipalities. There is already talk of a further U.S. fiscal package.

It will take quite some time for economic activity to move back to its levels before the COVID-19 pandemic. Demand will remain weak for as long as social distancing remains in place. Authorities are not likely to want to lift these restrictions until there is clear evidence that infection rates have peaked and deaths from the disease are falling to very low levels. That said, we could see significant relaxation of restrictions in the United States in late May.

It’s also worth noting that economic risks rise as the economy weakens. If the medical data alone do not permit some relaxation of social distancing on the timeline we sketched out above, the pressures from society as a whole will force a relaxation.

V, U, or L shaped recovery?

Everyone has seen the headlines about “V,” “U,” and “L” as ways to describe the recovery. Add in the Nike swoosh as another stylized depiction of a possible path for the economy. The initial response is likely to be a short period of a strong rebound, as there will be some pent-up demand building during the months of weakness. Beyond this initial growth spurt, however, which might only last a month or two, the outlook is not good for a number of reasons.

First, it’s possible, indeed likely, that at least some social distancing restrictions will be re-imposed. They probably won’t be economy-wide but would certainly be a headwind for the economy. Secondly, key sectors of the economy are likely to recover very slowly. How anxious will people be to get back to prior behaviors? Fears over the virus may be slower to dissipate than formal restrictions on movement. People may also change their behavior more permanently, deciding to visit restaurants less frequently, for example.

The third reason is that there has probably already been some long-term damage to the economy. A lot of small businesses probably don’t have the cash reserves to last until various loan facilities get ramped up or may simply be unable to navigate the administrative processes involved. Similarly, some households that have lost income will be unable to take advantage of even unemployment benefits. Although these damaged sectors are low-productivity sectors, they matter for the level of activity the economy will achieve as recovery takes place.

Moreover, rising unemployment does not only affect the unemployed; those who remain employed adjust their behavior out of concern they may lose their jobs. Other key sectors may also see more long-lasting difficulties. The auto industry wasn’t expecting much from 2020. Almost half of the world’s jets are not flying. These are just examples of what will be a widespread issue, and we expect the economy will feel these effects at least through 2021.