June was a volatile month for risk appetite. Early in the month, the risk rally was accelerating, and the U.S. dollar was depreciating against other currencies. The dispersion in returns, adjusted for volatility, was disappearing and optimism was rising as the global economy was reopening. Higher asset returns and the outperformance of sectors that were hardly hit by the coronavirus pandemic were probably incompatible with a world still dealing with the virus and recovering only with plenty of policy support.

But as states eased mobility restrictions, there was a spike in COVID-19 cases in a large number of places such as Florida and Texas. The reopening and rising number of cases had been going on for a while, but asset markets didn’t seem to care very much about it until concerns about insufficient Fed policy materialized. The main sell-off started just after the Fed meeting in mid-June and continued for a few days. A key factor is the Fed’s rapid tapering. During the heat of the crisis, the Fed was buying $75 billion of Treasury securities a day. As the Treasury market stabilized and financial markets started to recover, the Fed reduced the pace of purchases week by week down to $4 billion per day.

In the first two months of this tapering, Treasury bond rates managed to stay in a very narrow range despite the Fed’s reductions. In late May and in June, as the Fed continued to taper, global rates started to rise. Since this coincided with rising optimism over global growth, there was a case to be made that the Fed’s tapering was in line with the economic developments.However, we need to remember that the risk rally since late March was due to the proactive policy response.

Without a proactive Fed, the risk rally would be in trouble.

Without a proactive Fed, the risk rally would be in trouble. The Fed clearly got nervous about the sell-off and quickly announced its intentions to purchase individual corporate bonds. A real rate rally followed and stabilized risky asset markets. As the economy enters the second half of the year, we believe the Fed will need to step in with more policy support as the initial phase of growth fades. Whether that will be through more explicit yield-curve control or an expansion of its quantitative easing program isn’t yet clear.

Although risk assets gave back some of the earlier gains, they managed to end June in positive territory. Since the markets peaked early in June, secular winners outperformed. However, for the whole month, the laggards in the recovery periods remained outperformers. Non-U.S. assets and currencies, in addition to energy commodities, were notable outperformers. 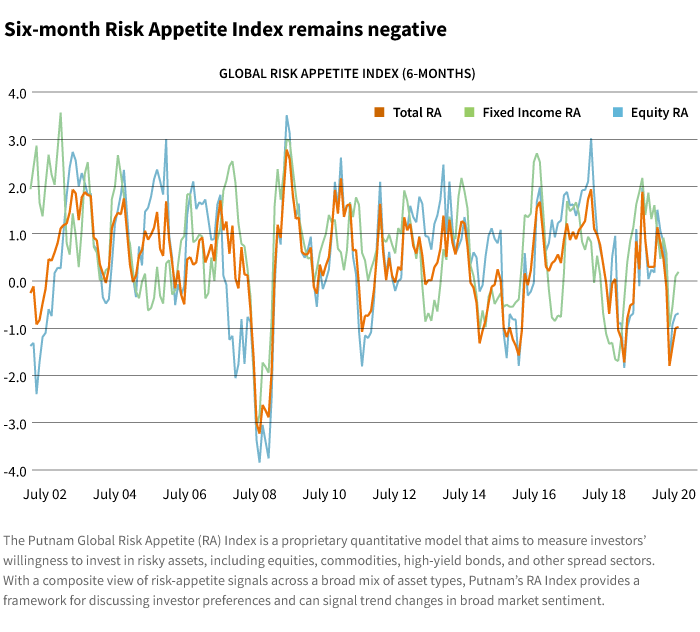 The three-month Risk Appetite Index, which shows the historic returns of the second quarter, and the six-month Risk Appetite Index, which indicates year-to-date performance, point to the outperformance of sectors, countries, and currencies that benefit from or are less severely hit by the pandemic. The six-month risk measure, which covers the first half of 2020, remains negative. In addition, long-term Treasury bonds — anything longer than the 10-year — are the best performing assets during the first half of the year.