The victory for the “Leave” campaign in the U.K.’s June 23 referendum surprised global markets, particularly in light of pre-election polls that favored a win for “Remain” voters. The initial market response of falling bond yields and stock prices subsided and reversed course somewhat, but we continue to see vulnerability in the British pound and economy, as well as a number of secondary effects that could unleash more volatility. 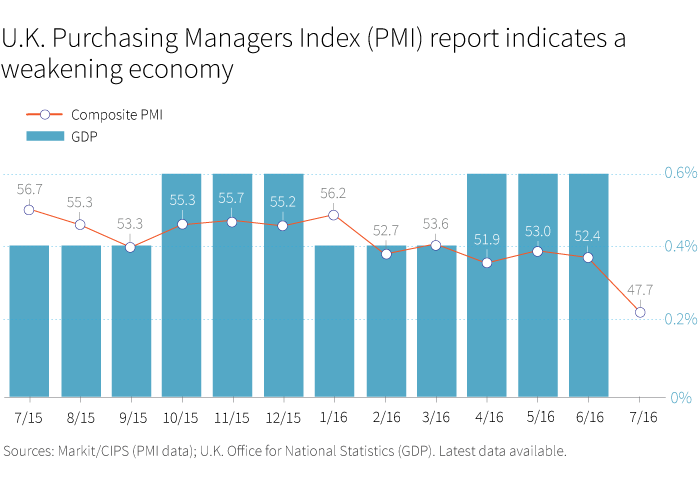 One of our chief concerns is the vulnerability of the pound. The United Kingdom runs a current account deficit representing approximately 7% of GDP, funded by foreign direct investment and by portfolio flows from abroad into British sovereign debt, or gilts.

In the wake of the referendum, foreign direct investment is likely to weaken as firms wait to see how the U.K.’s trading relationship with the EU is resolved. Portfolio flows have held up well so far, but may be at risk following recent rating agency downgrades.

The bottom line is that difficulty in funding the current account deficit could, in an adverse scenario, lead the Bank of England to raise rates to protect the pound and attract overseas flows. However, higher rates would hurt the already fragile economy.

The example set by Brexit — both the vote itself and the political stances taken as leaders negotiate the separation terms — may strengthen other anti-EU parties across Europe. Uncertainty regarding the terms of Brexit is likely to expand across the EU, which could restrict investment risk taking. In concrete terms, this means that factories might not be built, houses may not be purchased, and the brakes may be applied to economic growth. Also, M&A activity is likely to stall, and investors may shun equities for the perceived safety of bonds and gold.