In this analysis we assess asset class performance during prior cycles of Federal Reserve monetary tightening. Specifically, we measured performance across interest rates, equities, and fixed income the year after the start of rate hike cycles. Additionally, we looked at the impact on U.S. 10-year note yields as well as the slope of the U.S. Treasury curve.

Over the past 30 years, there have been four distinct tightening cycles. We define a tightening cycle as a period when the Fed increased the federal funds rate multiple times.

In the sample period, the median number of Fed rate hikes is eight and the median time frame is 18 months, from the first hike until the final hike. Fed policy actions likely caused, or contributed to, economic recessions following the cycles ending in 2000 and 2006.

Exhibit 4 illustrates S&P 500 performance in the year following the Fed’s first rate hike. Markets have tended to trade lower in the months following the start of a tightening cycle, but in each case have ended higher one year later. 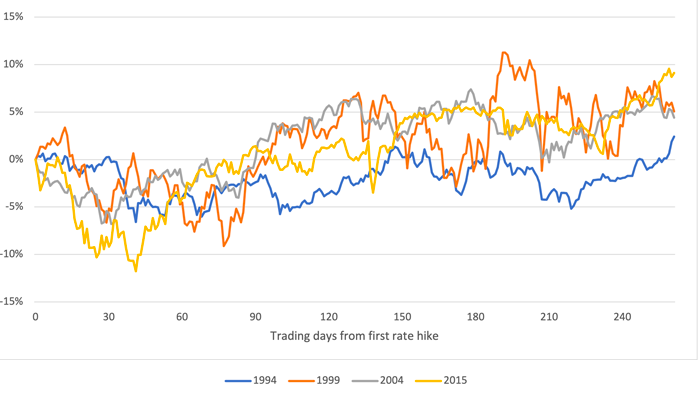 We observe the median drawdown to be 9% in the first 49 days following the Fed’s first rate hike.

Equities by size and style 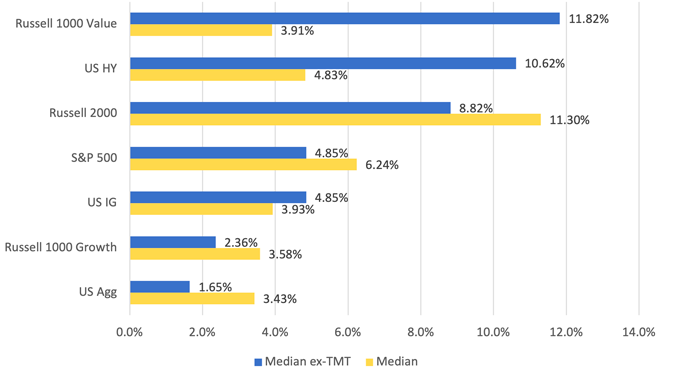 For Investment Professional Use Only – Not for public distribution.

For informational purposes only. Not an investment recommendation.

The views and opinions expressed are those of the author, are subject to change with market conditions and are not meant as investment advice.

ICE Data Indices, LLC (ICE BofA), used with permission. ICE BofA permits use of the ICE BofA indices and related data on an “as is” basis; makes no warranties regarding same; does not guarantee the suitability, quality, accuracy, timeliness, and/or completeness of the ICE BofA indices or any data included in, related to, or derived therefrom; assumes no liability in connection with the use of the foregoing; and does not sponsor, endorse, or recommend Putnam Investments, or any of its products or services.

BLOOMBERG® is a trademark and service mark of Bloomberg Finance L.P. and its affiliates (collectively “Bloomberg”). Bloomberg or Bloomberg’s licensors own all proprietary rights in the Bloomberg Indices. Neither Bloomberg nor Bloomberg’s licensors approve or endorse this material, or guarantee the accuracy or completeness of any information herein, or make any warranty, express or implied, as to the results to be obtained therefrom, and to the maximum extent allowed by law, neither shall have any liability or responsibility for injury or damages arising in connection therewith.