A look at recent trends in the U.S. economy suggests that the potential U.S. growth rate is declining. The first reason for this conclusion is that investment has been so weak recently, which means the country’s capital stock has been growing only very slowly. Without investment growth, an economic growth cycle tends to be short, coming primarily from firms squeezing extra output from their workers and their machines, rather than making jumps in productivity. Over time, investment and the growth of capital stock plays a big role in sustaining overall economic growth.

Labor force growth has slowed
The second reason to expect slower U.S. growth is weakening labor inputs, as outlined in a previous post. Analyzing the growth rate of the labor force requires looking at three factors. The first is natural population growth, or the combination of births and deaths. If births are rising faster, then more babies today mean more workers in the future. The second factor is immigration, which brings workers into an economy without having to go to the trouble or expense of having babies. The third factor is labor force participation, or the quantity of people who choose to work or look for work.

Immigration has declined
All three factors have been in decline in the United States. While the population continues to increase, the natural population growth rate has been falling for nearly half a century. Immigration, including undocumented immigration, has dropped off more recently. This drop has resulted both from more money spent on border patrols and from subpar economic conditions, which have proven to be less of a magnet to migrant labor. 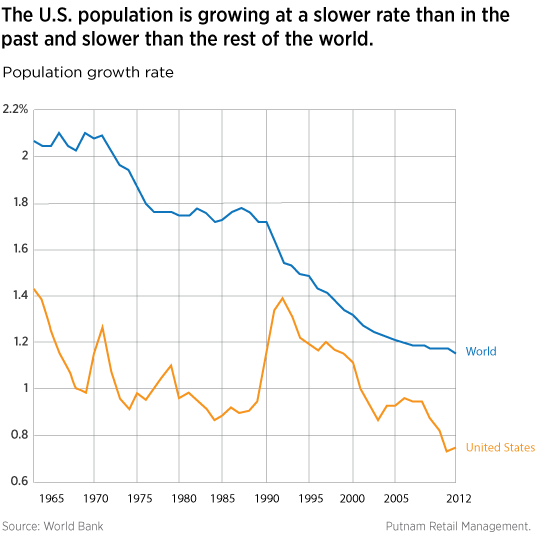 The labor force participation rate is experiencing an historic shift
In addition to the population factors, labor participation has also been in decline because of what appears to be combinations of cyclical and structural reasons. In an economic downturn such as 2008–09, labor force participation typically drops. Cyclical factors emerge. One example is that young people react to the weakness of the labor market by continuing their education or earning extra qualifications. A second factor is the “discouraged” worker effect: People try to find work, but are unable to get a job and then stop looking.

In a typical cycle of downturn followed by recovery, both of these effects tend to reverse themselves in short order. Young people finish their education and pick up with their job search, while “discouraged” workers find encouragement from the new availability of jobs and start looking again as well. This helps explain why the measured unemployment rate does not fall very fast during a typical upturn: As jobs are created, people seek to rejoin the labor force. 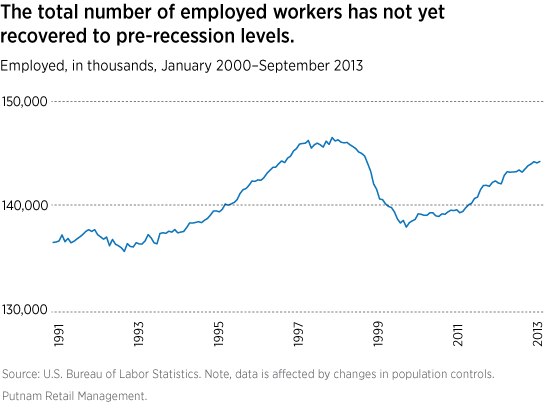 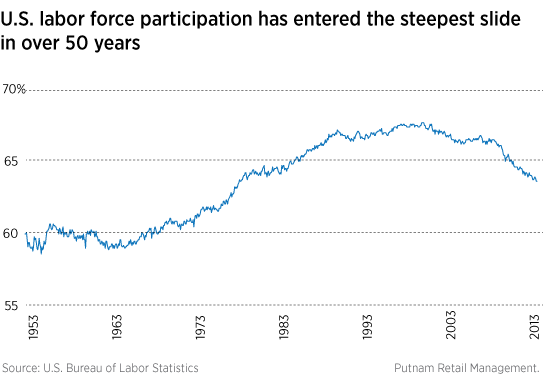 As for the baby boomers, their aggregate move into retirement will naturally cause the growth of the labor force to slow. The financial crisis hit savings hard, and so a greater proportion of older workers has continued working. Nevertheless, participation rates inevitably tend to drop as people pass their mid-50s.

Anticipating the likely growth rate of the economy in the future hinges on a better understanding of the current dynamics of the cyclical and structural factors influencing labor participation rates.