The possibility of higher taxes in the future could boost demand for tax-advantaged investments.

Rising federal budget deficits are likely to compel lawmakers to find revenue sources or risk rising interest rates. This pressure, combined with the expiration of the Tax Cuts and Jobs Act (TCJA) in 2025 pose planning challenges for taxpayers. If no legislative changes are made by the time the TCJA sunsets, tax rates will revert back to 2017 levels, resulting in increases. Tax code changes could be made earlier, depending on the 2020 election.

At some point, revenue needs could push lawmakers to increase tax rates or impose new taxes. In response, municipal bond funds may grow in popularity.

Below, we’ll look at what’s driving the federal budget situation, then turn to some of the tax and revenue proposals of the 2020 candidates that might be debated in coming years.

The deficit could quadruple

Tax increases may be one way to try to offset the soaring federal deficit.

Multiple forces are at work. The cost of federal mandatory programs is rising as the population ages and health-care costs continue to escalate. This year, the pandemic has strained federal revenues while emergency relief packages, including the CARES Act, have pushed up spending. As GDP contracted at an unprecedented pace in the second quarter and over 20 million jobs were lost, state and federal tax receipts plummeted.

At the same time, it’s important to keep in mind that a recovering economy and progress on vaccines for COVID-19 could help lift economic growth rates and tax revenues in 2021 and 2022. 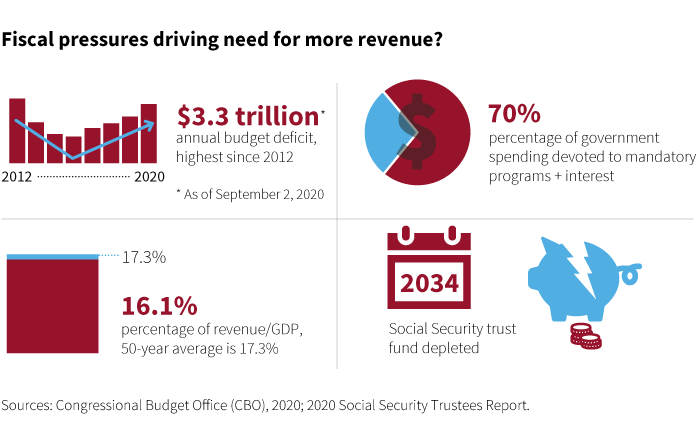 The interest earned on municipal bonds is free from federal and, in some cases, state and local income taxes.

Municipal bonds become more attractive on a relative basis for taxpayers who may be subject to the 3.8% surtax on investment income and who may also be subject to the highest marginal tax rate. Amid economic weakness and investor risk aversion this year, the yields of taxable investment-grade bonds have fallen to low levels, making municipal bonds even more competitive.

Demand for munis has also been solid since the TCJA set a cap on state and local tax deductions (SALT). With that change in the law, many taxpayers have not been able to itemize deductions, making them consider other strategies for reducing taxable income. Because municipal bonds are exempt from federal income taxes, retail demand has increased. Individual investors in high-tax states like New York and California have used munis to try to mitigate their tax liability.

Tax proposals for debate in 2020 and beyond

Here are some of the highlights put together by the Tax Foundation of the tax proposals from the Republican and Democratic candidates for president (Source: Tax Foundation, as of August 25, 2020):

Evaluate yields on a tax-equivalent basis