A recent study of more than one million participants in employer-sponsored defined contribution plans found that, on average, workers who contribute to both an HSA and a 401(k) saved 8.9% in the 401(k) and an additional 2.9% in the HSA. For workers who only save in a 401(k), the average contribution rate was 6.8% (Alight Solutions).

The savings pattern remained the same even when controlling for different factors such as income, the report stated.

While just over 60% of workers use both HSA and retirement benefits, about 10% of workers were not enrolled in either plan.

The study found, however, that income level has an impact on enrollment. Workers earning $40,000 or more are more likely both to elect health coverage and to save in a 401(k) plan than workers who earn less. This is perhaps because low-income earners are unable to divert earnings for savings.

Also, high earners were more likely to enroll in a plan with an HSA. Among those earning $60,000 a year or more, 53% were enrolled in a medical plan with an HSA, compared with 44% of workers earning less 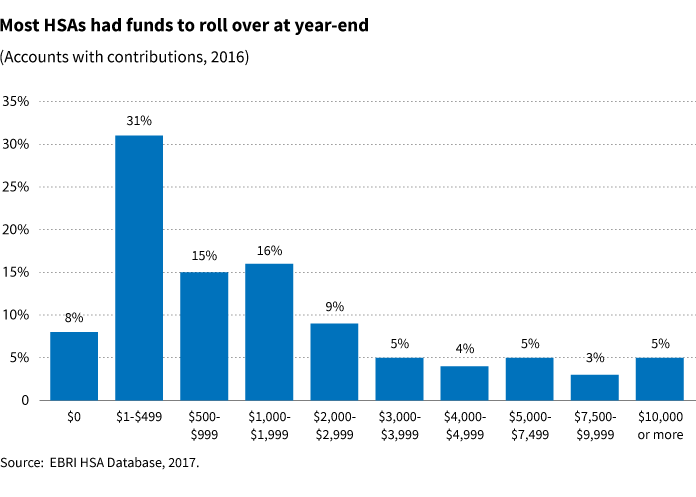 Accounts are on the rise, but usage varies

While the number of health savings accounts has increased in the past 10 years — to 20 million in 2016 — not all savers use the accounts in the same way.

At the end of 2016, the average balance in HSAs was $2,532, according to the Employee Benefit Research Institute.

Still only 3% of savers had used the account’s flexibility to invest assets outside of cash instruments. And only 13% had contributed the maximum allowable amount.

Those who invested beyond cash had higher account balances than non-investors.

The possibilities for building up higher asset balances in HSAs and the investment options that the accounts permit are two areas in which plan providers have an opportunity to educate workers about the potential of health savings accounts.