As the Federal Reserve plots its actions and communications strategy for the gradual normalization of monetary policy, fixed-income investors face the challenge of anticipating the future course of interest rates.

Economic growth influences interest rates
The long-term “equilibrium” interest rate of an economy is intimately linked to the economy’s overall growth potential when it is free of distortions, such as recessions or the energy supply shock of the 1970s, or the demand shock that followed the financial deleveraging crisis of 2008. The term “equilibrium” does not imply that these rates prevail most of the time. In fact, there can be large deviations from the equilibrium. 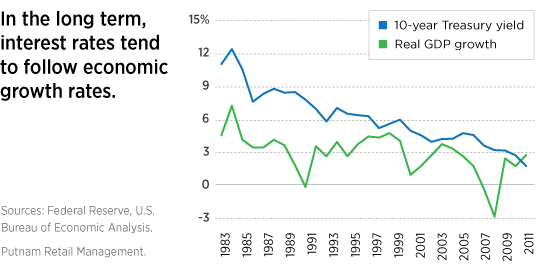 Understanding growth depends on analyzing labor
To calculate an economy’s growth potential, the most important variables involve labor — how much labor is available and how much capital is available for labor to utilize, which determines overall labor productivity. An economy’s growth rate is driven primarily by the change in labor supply and the change in labor’s productivity.

The United States faces growth challenges
When economic experts look at these factors in the recent history of the United States, most conclude that the potential U.S. growth rate is declining. That’s because the labor force is growing more slowly than it did in recent decades and because productivity has also been disappointing. We’ll look at these factors in subsequent posts.

Of course, rates would still likely be higher than current levels, which are being held below equilibrium by the Fed’s asset purchase programs.