We expect the U.S. economy to outperform the rest of the Group of 10 (G-10) countries during the current coronavirus crisis. This is partly because of the policy responses from the government and the Federal Reserve to boost the economy and calm the financial markets. Against this backdrop, we analyze whether there are any limits to U.S. fiscal and monetary support for the economy.

Fiscal policy will run into political limits at some point. The cost of debt service will become an issue sometime in the future, but this is a joint function of the level of debt and the interest rate, not of the level of debt itself. The U.S. government’s debt is in the headlines because people think of it as a liability, but bonds are someone’s asset. There is as yet no real sign that demand for these assets are troublingly weak; central banks are buying a lot of them although not all.

If there is a limit to fiscal policy, we haven’t found it yet.

Nonetheless, we believe there is point at which the sheer size of the public sector would become a constraint on the private sector. We don’t know exactly where that is, and we don’t believe we are at that point now. If there is a limit to fiscal policy, we haven’t found it yet. The U.S. fiscal responses to the global financial crisis and the coronavirus economic crisis have been larger than other countries. In addition, Washington is mulling another fiscal package. Despite some inefficiencies in the fiscal response, when we add to this the aggressive measures taken by the Fed, we believe the U.S. economy will not suffer as much as the rest of the advanced world. 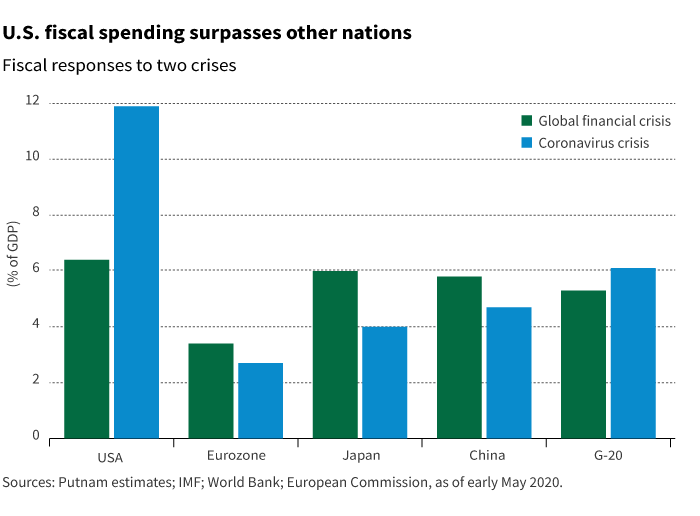 Monetary policy is a bit trickier. The Fed’s balance sheet doesn’t have any actual limits. There is a practical limit because the central bank will need a continuous supply of assets to purchase. Still, that is hardly a binding constraint. There may well be a political limit at some point, but again, we don’t believe we are there yet. The people who thought the first round of quantitative easing (QE) would lead to hyperinflation have crawled back into the woodwork. A central bank can also be used to generate inflation — as seen in Venezuela — but again, in our opinion, the United States is a long way from having the legal and institutional arrangements that would produce this outcome.

But what about interest rates? Can the Fed do more? In a world of yield-curve control, we can think about the policy rate and the rate at some term point, say 10 years. The Fed’s policy is aimed at keeping rates low and preventing an unwarranted steepening of the Treasury yield curve. Many years ago, we believed there was a nominal boundary of zero (the zero-bound) for interest rates. We have, however, learned better as many central banks adopted negative policy rates. Several economic models for monetary policy suggest the appropriate policy rate in the United States would be negative.

There is a lower limit on rates. Academics have concluded there is a negative rate below which the costs of low rates exceed the benefits. Exactly where this “reversal rate” is will depend on an economy’s financial structure, but we believe it is not very far below zero, in our opinion. The Fed’s senior policy makers have indicated they don’t really like the idea of negative rates and would like to keep this off the agenda. Could this change?

Financial markets can drive long-term rates below zero. Germany’s rates have been negative for quite a while, and Japan has seen rates below zero. Could this happen in the United States? We believe it would require yield-curve control (YCC) to be asymmetric — the Fed would buy Treasuries to prevent an increase in yields and not sell bonds to prevent a fall in yields. The European Central Bank (ECB) has done this because it is concerned about keeping nominal yields low in the periphery. And given the need for a spread, this required yields on German government bonds (bunds) to be lower.

Whether the Fed would see yield-curve control to be symmetric will depend on real yields. The Fed wants to keep real yields low, and if deflation risks rise sharply and deflation gets priced in, then nominal yields may need to decline. It is possible that future global economic developments could drive more foreign capital to the United States. So, in our opinion, a negative 10-year rate would require some combination of strong capital inflows, a deflationary shock, and an asymmetric yield control policy from the Fed.

These don’t seem especially likely, but we can’t rule anything out. And a negative policy rate? The Fed would prefer to avoid this. But if the 10-year rate gets pushed lower, the Fed may want to minimize the curve inversion, or try to keep it with some steepness. So again, we can’t rule it out, even though it seems very far from being a base case.