In light of decades-high inflation, the Federal Reserve tightening monetary policy, and concerns about an economic slowdown, U.S. consumer sentiment has plummeted.. This year, sentiment is historically low, according to the University of Michigan Survey of Consumers.

In this analysis, we look at the relationship between the highs and lows in consumer sentiment, and forward equity performance.

The University of Michigan conducts a monthly survey of U.S. consumers. The index of consumer sentiment measures attitudes toward personal finances, general business conditions, and market conditions, or prices.

The July index reading of 51.5 was up slightly from June’s reading of 50. These are the lowest readings on record for the index.

Exhibit 1 looks at troughs in consumer sentiment and the forward performance of the S&P 500 Index. 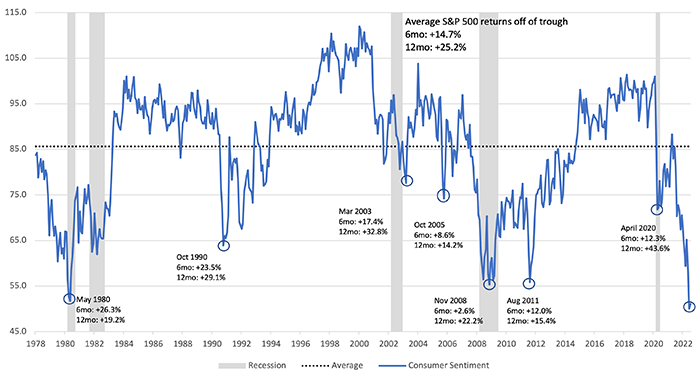 The S&P 500® Index is an unmanaged index of common stock performance.

You cannot directly invest in an index.